This was my "A" race for the year and since it was my second 70.3 distance, I was better prepared mentally and physically. Full race results can be found here. Here is the analysis of my times:

Two weeks before the race I had cold with running nose and cough, but I trained thru it and ignored it since there was no fever and I felt more or less normal.

In preparation for this race I did bike chain cleanup. I also bought new Continental 4000s race tires and put them on both front and rear. These are highly rated and are puncture resistant. My old tires were the originals that came with the bike and they had over 3,000 miles on them with visible signs of wear.


The race was held at the Cedar Point amusement park and start and finish are right next to the park entrance with roller coaster and all the park fun going on: 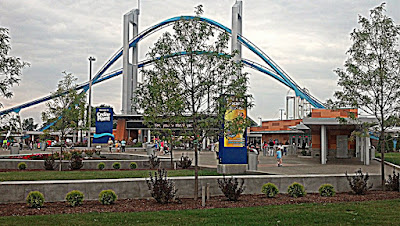 The swim was supposed to be held in Lake Erie, but because of strong winds and high waves it was moved half a mile (or more) away from transition to the inner harbor on the other side of the island. The race was wet suite legal and water was relatively clean and not too cold. I felt pretty good on the swim and as always did not push very hard. However one problem was that I zig-zagged quite a bit and had to get back to the proper position quite a few times during this swim. I did practice sighting in the pool and do not lose much speed when I sight, but I did not do it often enough and I think this contributed to getting off course. I passed few swimmers and few people passed me.

The best thing was that this was a time trial swim start. In other words, we did not start the heat all at once, but rather walked at our own pace thru the timing mat - two people at a time and your time starts when you cross the mat. This made for a comfortable start and helped to avoid the mess. This race was a little bit unique for me as I was not as nervous as usual. For whatever reason I felt pretty good and relaxed, waiting for the start. 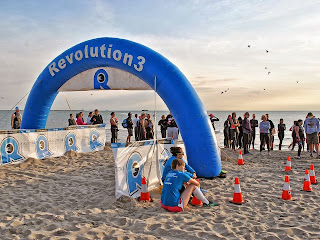 Things to do for the next race:

Because the swim was moved over half a mile away from the transition, it took quite a bit of running to get to T1 - all bare feet on asphalt. However my T1 time was better than top 5 overall finishers of the race (!!). This was the first time I used the service offered by strippers - those people do not dance naked, they rather take your wet suite off in a matter of seconds. I ran quickly to the T1 and got on my bike in no time. As always I had my shoes clipped on and this helped to save time in transition. Bare feet in bike shoes - as always. I never use socks on the bike in triathlon races, but I would use socks for the "pure" bike race if I did one. Since I do not have a road bike, I can't really participate in "pure bike" road races. May be it is time to get a road bike so I can do it? Something to think about for 2014.

Bike was almost as flat as Eagleman race with very few small hills on the way. This was my first race ever when I had heart rate monitor and GPS on me. Here is the bike report from my Garmin watch - click to open interactive dashboard: 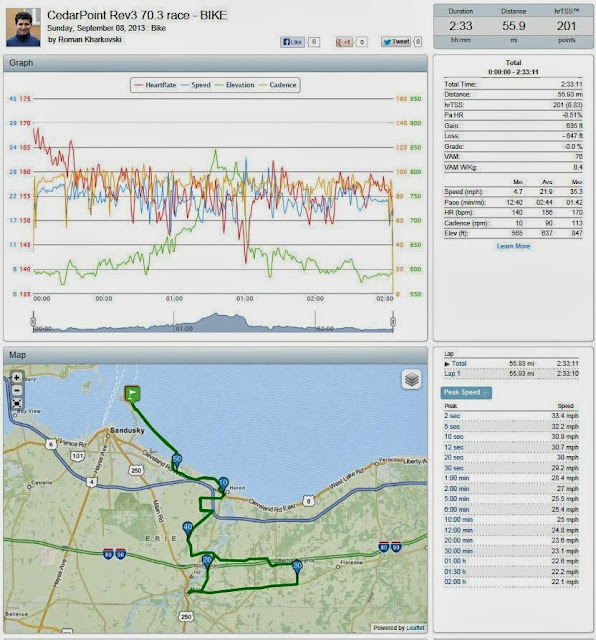 Overall I felt very good on the bike and did not go all out - saving some steam for the run. I did do several long rides of 2.5 to 4 hours and it helped a lot. However 99% of my bike training is on my recumbent bike, not even on the real bike, so it is hard to compete for the podium without training on the real bike and without intervals. 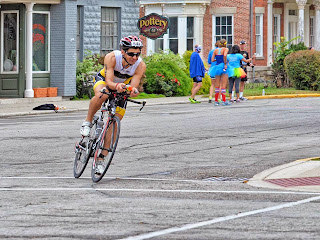 The wind at times was extremely strong blowing from the side and some times into the face, so the bike time is a bit slower than expected, but still better than my last race. Notice that the average RPM on the bike is exactly 90! I passed a couple of hundred people on the bike and about 5 people passed me. Loved it.

T2 was good and smooth. I definitely wanted to put on my socks and this contributed to slightly slower T2 time compared to top athletes. However it was totally worth few seconds. Here is the picture of transition area as it looked before the race: 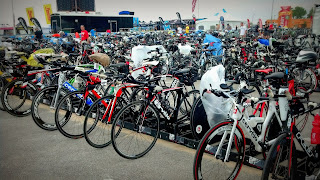 The run during the Eagleman back in June felt very very hard, so I was curious to see how it will go this time, considering that I was running quite well in training and shorter races. I started out at the pace of 7 min/mile, then involuntarily slowed down all the way to the crawling 9 min/mile towards the end of the race as you can see in this Garmin report (click for interactive dashboard): 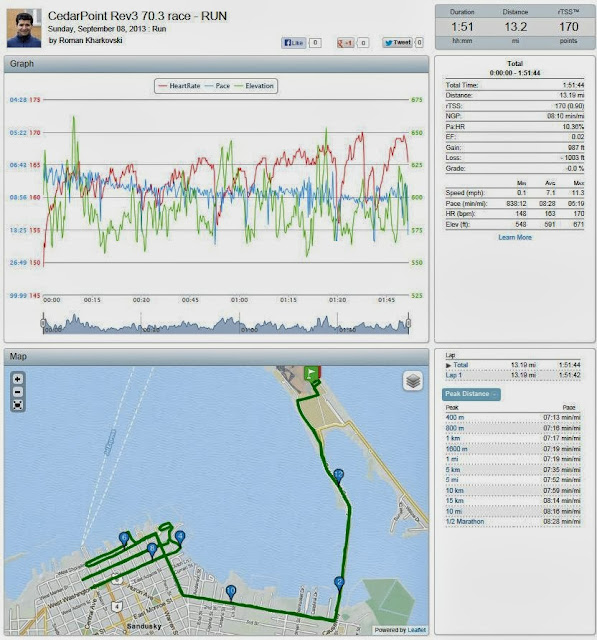 The run felt good until about mile 5 and then it started to get harder and harder very quickly. However the air was relatively cool and there was no sun, so I kept running. I did walk on most of the aid stations, but never stopped in between. It felt better compared to the run at the Eagleman, but was still a very very hard run. I could say I more or less fell apart on the run. I watched GPS and in second half simply could not hold the pace at what I wanted it to be. In training I can run 13.1 miles with 7:30 min/mile pace, but this race was a minute slower than that. My full marathon pace was 7:45 min/mile back in late 2011, but I ran 4 times a week then and only 3 times a week with lower mileage now. Could that be a problem? 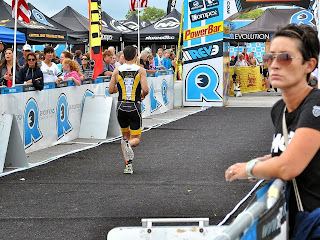 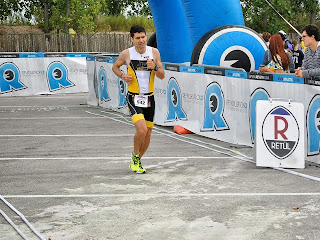 Things to do to improve the run:

For breakfast 2.5 hours before the start had half a cup of almonds, banana and orange, slice of bread with a table spoon of peanut butter and strawberry jam, cup of green tea and then sipped water. Had half a cup of apple sauce.

I had 1.5 bottles of Gatorade on the bike and about 0.7 bottle on the run (at aid stations). Took gels every 40 minutes on the bike and run. Did not have to use restroom during the race and overall nutrition seemed to work well.

Drove from Pittsburgh to Sandusky on Saturday morning - took 3 hours to get there. Slept in the car at the RV camping site on the back of the Cedar Point amusement park. It only took 5 minutes from that camping spot to the race start by car. The camping site office folks said I can just use their parking lot for free. The only problem was that it was noisy with all the amusement park rides and stuff up until about 11 pm. On the up side, this small camping site has free shower room, toilets, etc. All clean and nice. This is where I took shower after the race.

Two night before the race I did not sleep (bummer - never happened 2 night before). The night before the race I could not fall asleep on my own (again!) and had to take a risk with one tablet of Melatonin - never used it before. With this I got about 4 hours of sleep and woke up at 6am. Felt good - no residual effect from the tablet, so will definitely use it next time - will take one tablet about 3 hours before bed time on race night.

Oh yes, got this medal at the finish line (both sides shown): 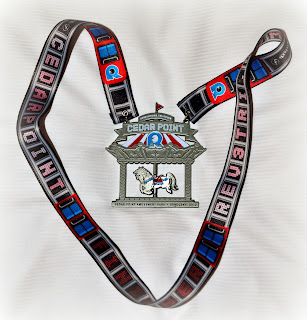 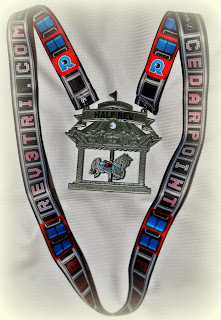 Here is TrainingPeaks report on the training leading up to the race.My annual training plan was auto-generated by TrainingPeaks.com. You can see training hours on this dashboard (click on the image for full size picture).