For several years I wanted to run Pittsburgh marathon, but other priorities took precedence until now. Finally this past Sunday May 4th I finished the race. This was my second full distance marathon and it was just as much fun as the first one I did in September 2011 (Erie Marathon at Presque Isle). Here is the result from the official site: 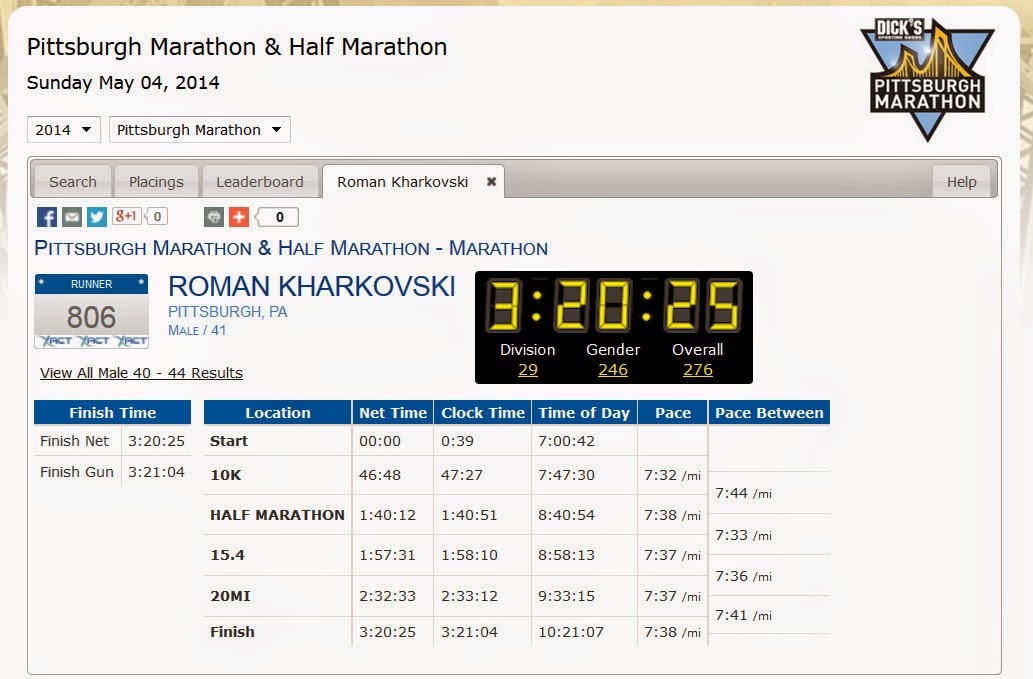 This was certainly my "A" race for the year as I wanted to improve my previous result, which I did. The Erie Marathon is very flat with only about 300ft of elevation gain, while Pittsburgh Marathon has 4343 ft of elevation gain and loss (for a grand total of net 0 elevation gain) according to my Garmin GPS. Nevertheless, after 2.5 years of training I improved my result by 3 min, 33 sec - not a bad result considering more difficult terrain. Here is the GPS track with pace and heart rate data from the GPS (click to go to the interactive map):

Race packet pickup was very well organized. I came in about 1 hour before they closed the place and had no lines. Took me only 15 min to get my stuff. I did not do any special carb loading the day before the race. Ate normal - some green veggies, chicken, bread, berry shake, etc. 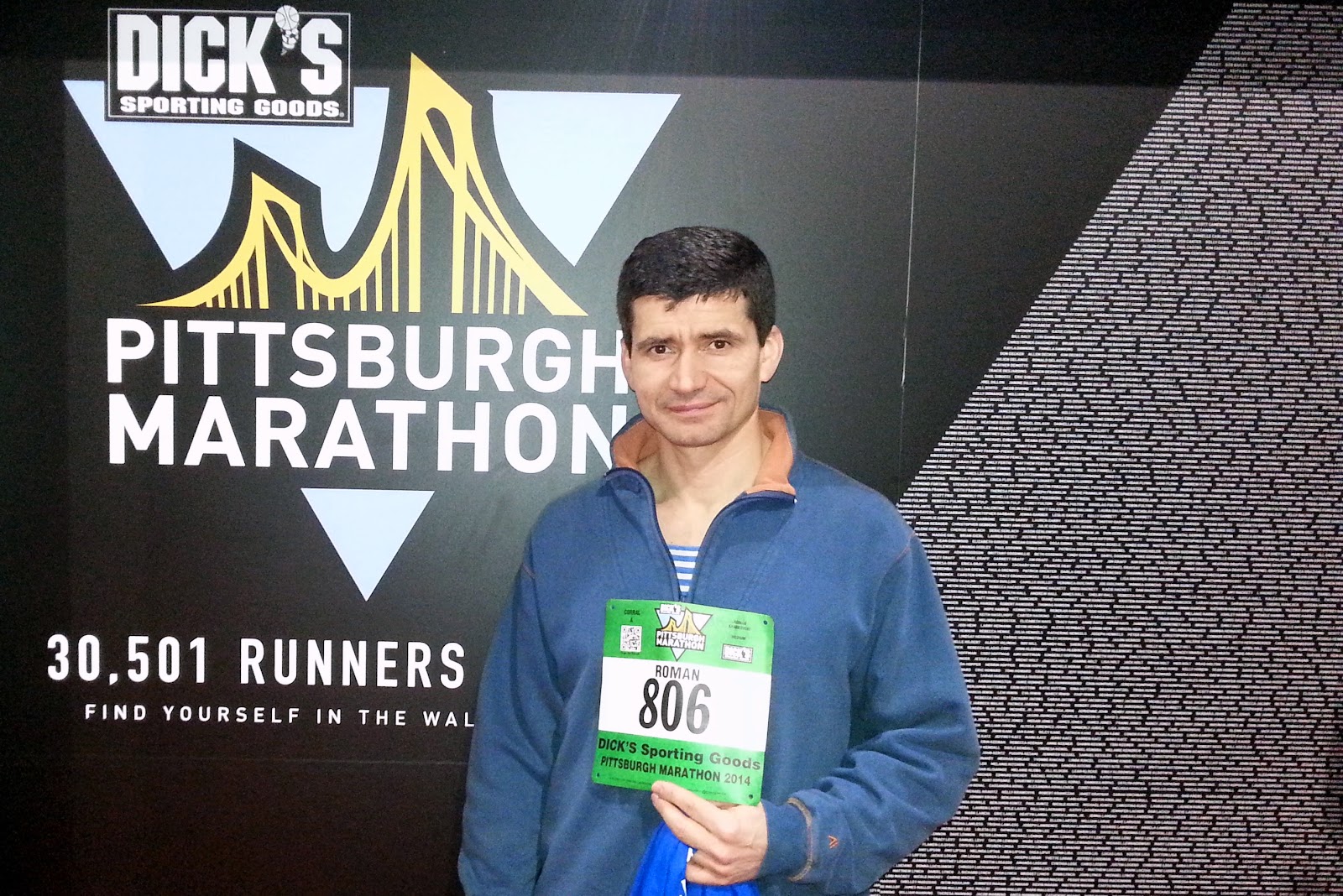 Just like I did the last time, I have used Hal Higdon "Marathon Training - Novice 2" plan (I used Novice 1 in 2011). Since 29 of December 2013 when the marathon training started, I did run training 4 times a week, cross training about 4 times a week, swimming twice a week, and biking 4 to 5 times a week. Here is the color coded schedule - feel free to click on the image and download into your own XLS document so you can update it for your own training schedule: 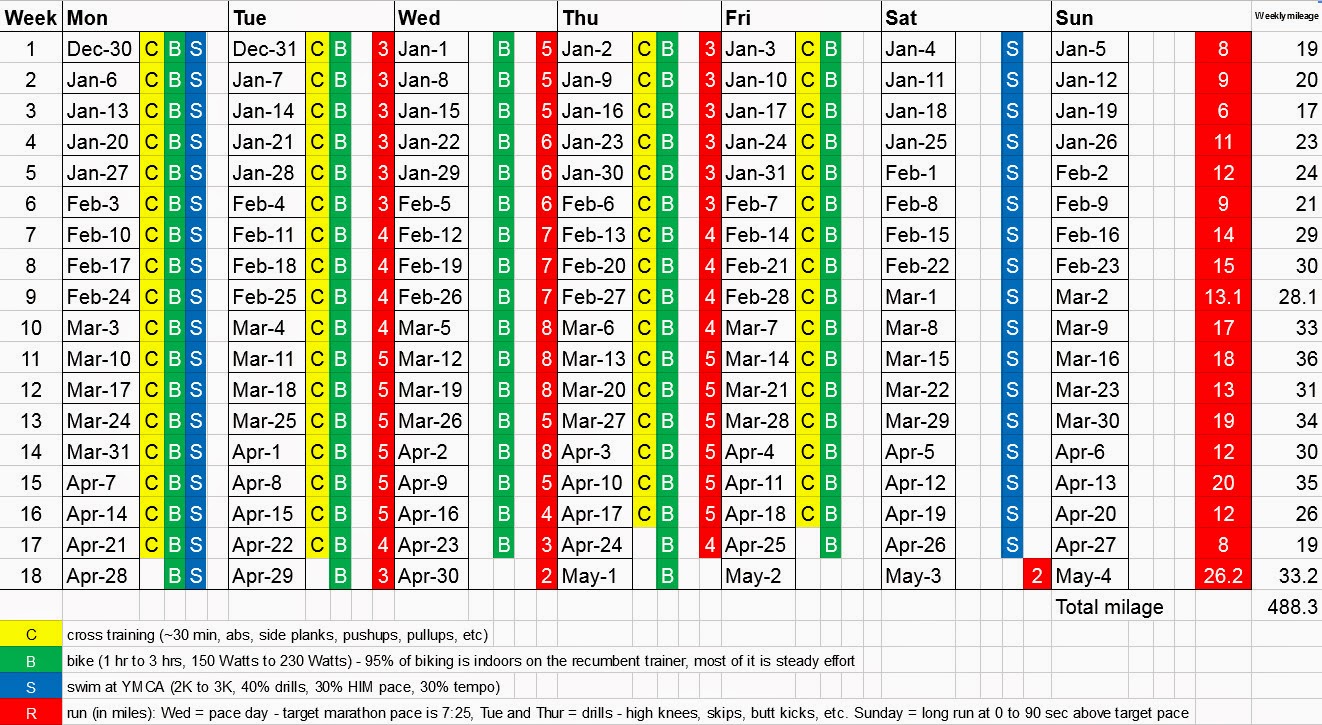 I was lucky to not be sick for the entire period from Dec 30 up until the marathon and have not skipped any workouts. I was planning to run 3h:15m, but I assume that will take few things:

I slept 9 hours two days before the race because I knew I would have trouble getting sleep the night before, which I did. That is I did not get any sleep the night before the race. Even a tablet of melatonin did not help. I just laid in bed with my eyes shut, but had no sleep at all. This was very annoying. I felt my heart rate increase for no reason - just overall anxiety before the race. If I only could get a solid sleep, I could have been so much more rested... I wonder what is the secret to this sleep thing? I never have trouble sleeping.

In any case, I got up at 4:15 am, checked weather forecast (for the 10th time), ate whole wheat slice of bread with almond butter and jelly, hot green tea, banana. Used bathroom for #2 and #1 three or four times. Woke up my wife and youngest son and we left the house at 5:30am. It turns out 30,000 people racing can create a traffic jam even at 6am. By the time we parked on the parking lot north of the Allegheny River (on the ball park parking lot) it was already 6:30. Instead of 30 min, it took 1 hour to get there. One more trip to the bathroom with waiting in line took another 10 minutes. We had to walk very fast across the river to the A starting corral. While on the bridge I only had 15 minutes left before the start, so I jogged to the corral A. Lucky it was still open. I ran in place for 10 min to warm up before the start and got my heart rate to about 130. I decided to pace myself using my GPS and that was a mistake. I should have joined the pace group wight from the start. While walking from the car to the start it was pretty cold and I wore old clothing - old pants and old sweater. I took it off 5 minutes before the start and put it next to the garbage can in the start corral. In hindsight, this was a great thing to do, but I should not have worn long sleeve shirt under my PTC tri race kit as it got warm enough and those long sleeves did not help. But again, the temperature being about 55 was just perfect for the race. 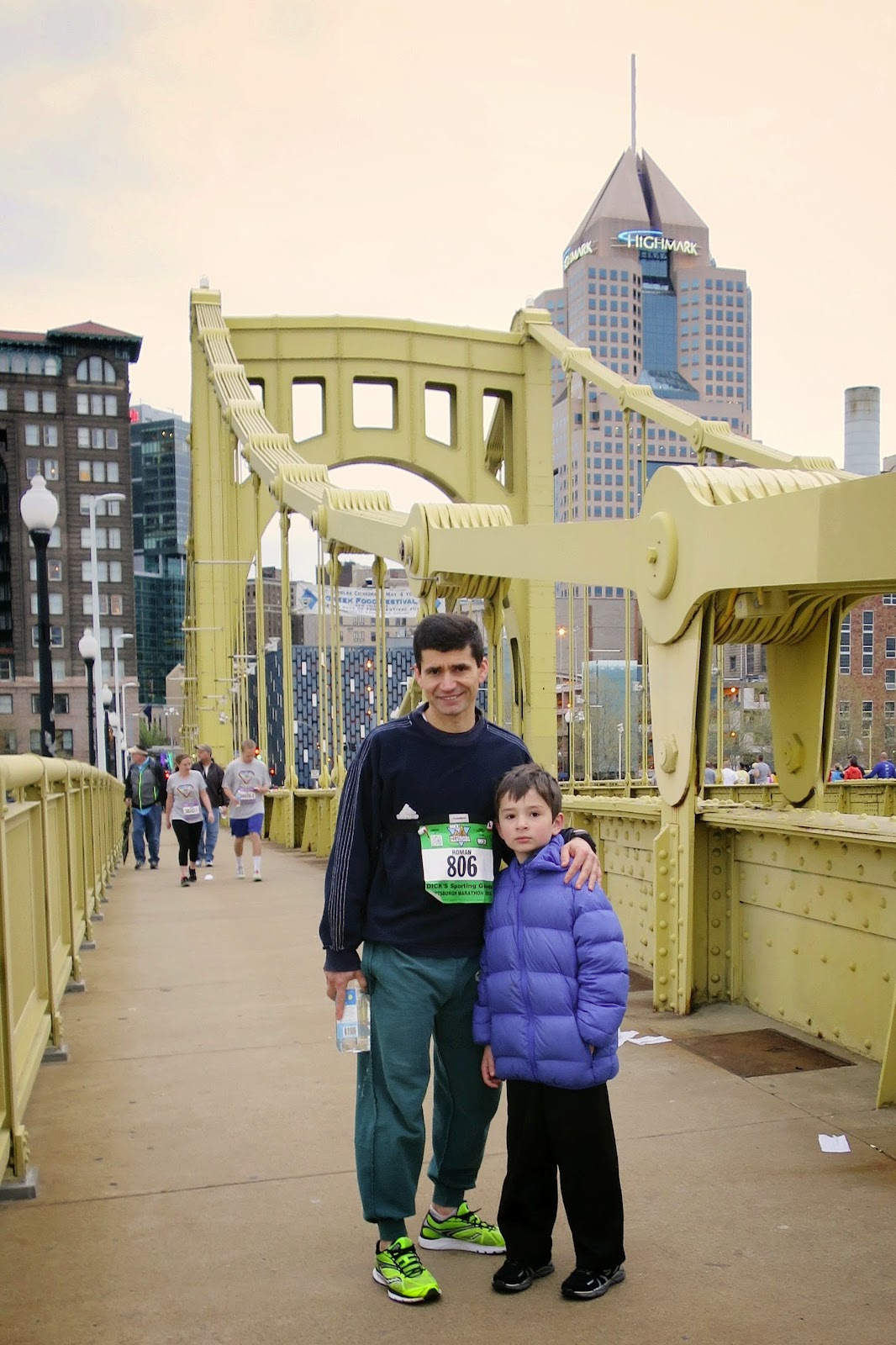 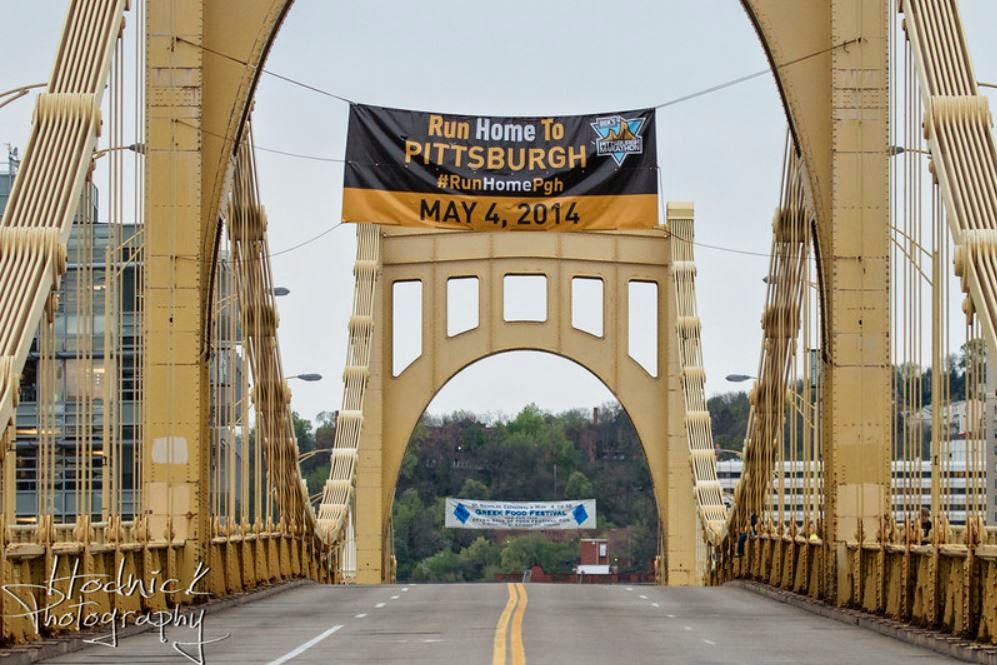 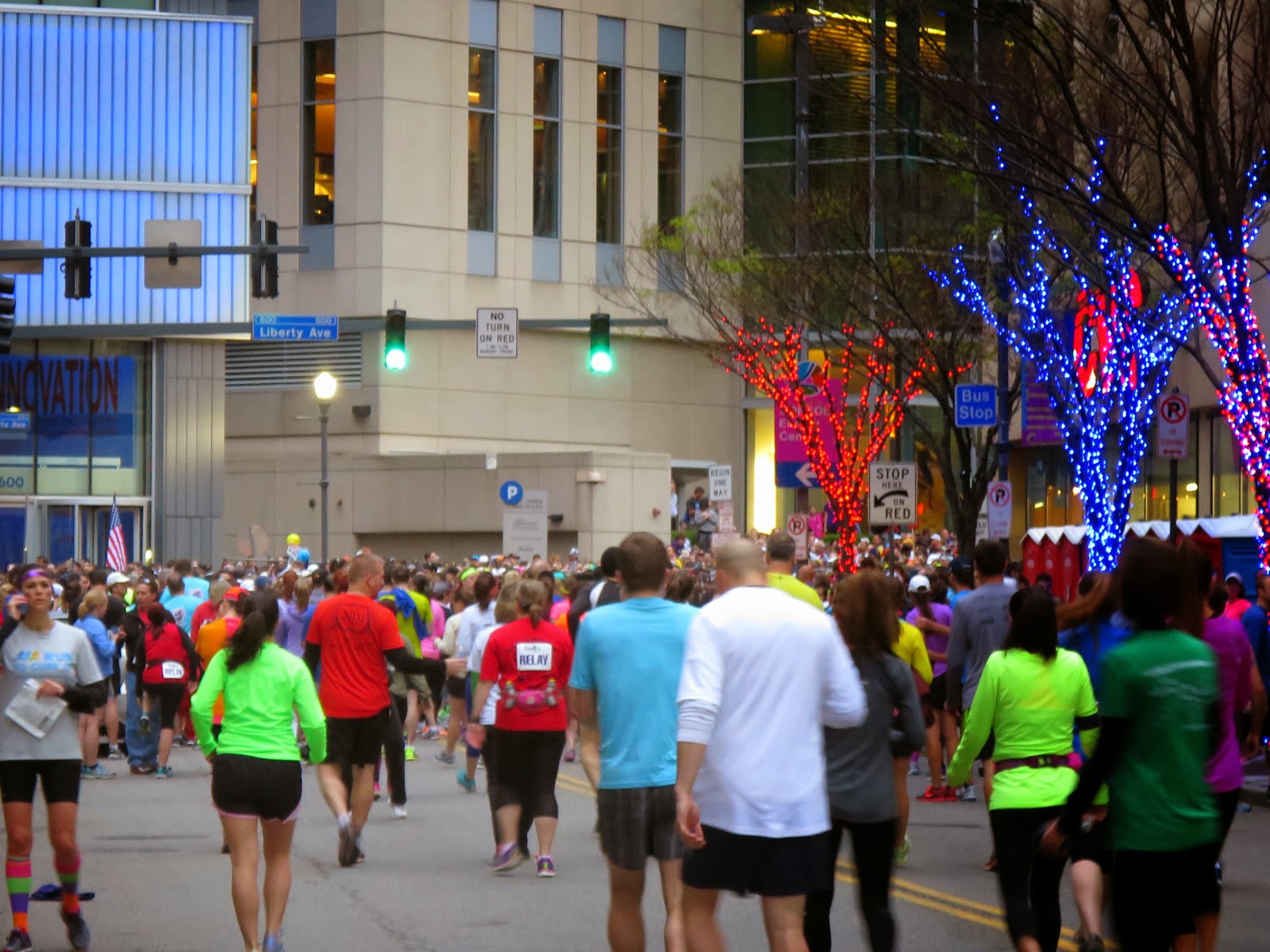 Despite the great number of people at the start line, it was not very hard to run in this crowd. Before the gun went off I saw two PTCers - Ed and Chris. I am glad I wore PTC kit as seeing "brothers in arms" was a nice bonus before the start! Even first mile was pretty good as everyone moved at the same brisk pace of about 7 to 7:30 min per mile and my expectation of being squished between hundreds of runners turned out to be false. After first couple of miles runners stretched even more (more so with every mile) and it became easier to find the best path to run. Even so, next time I will be more careful choosing my path as making wide turns really adds up during the marathon (read this good article). My GPS showed that I ran 0.3 miles more than a marathon distance. That is a couple of extra minutes on the clock that I should not have spent.

I sipped Gatorade about every 2 to 3 miles - about 1/4 of a cup at a time. That will make it approximately 3 full cups over the full distance. I think it was enough liquid as the temperature was about 50 degrees (perfect for running!). I also took my Powerbar Gels every 45 minutes - for a total of 4 gels (all 4 were different flavors). I think I could do away with 3 gels next time? The reason is that consuming a gel slows breathing and slows you down. Plus I don't think I needed all that extra energy anyway. 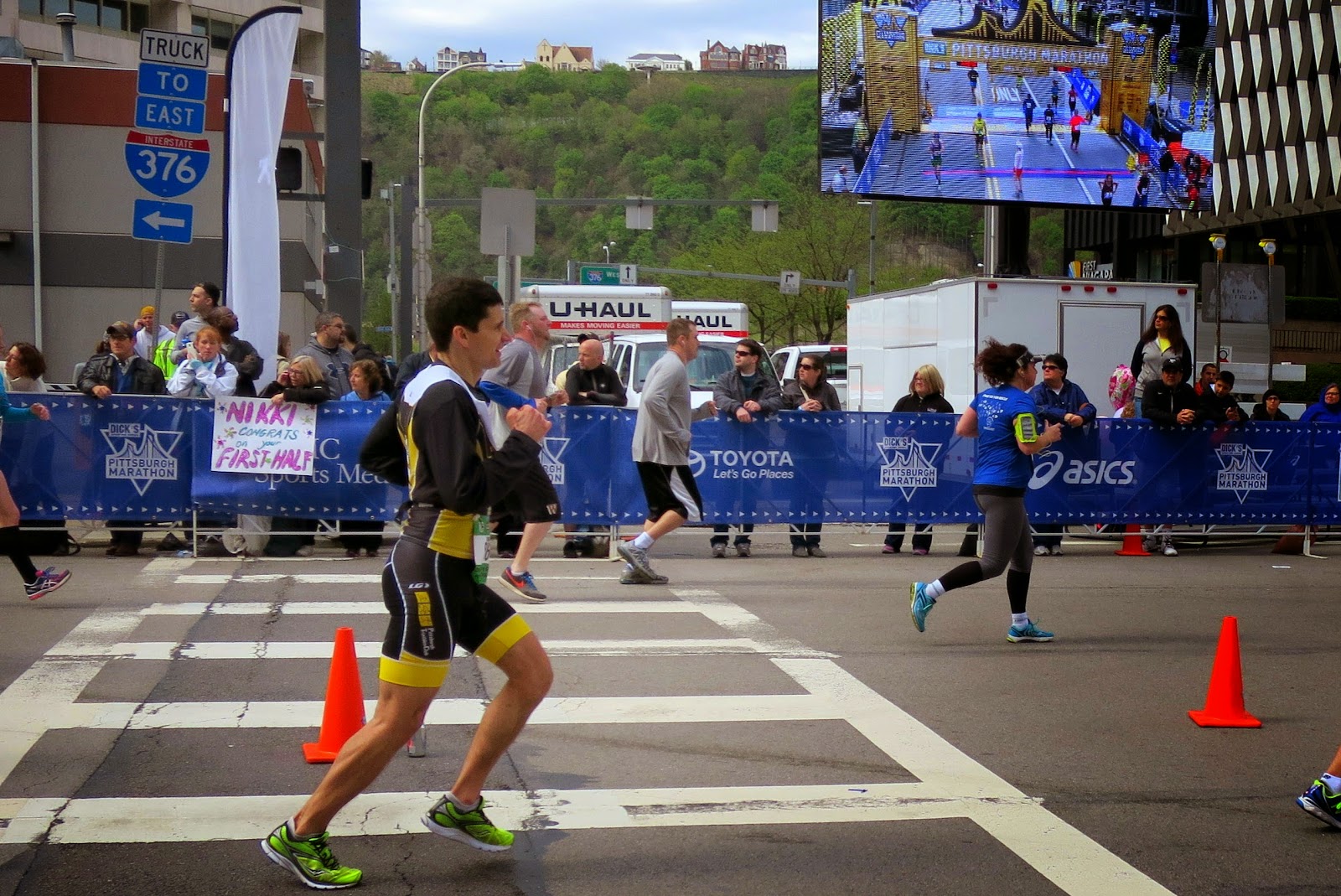 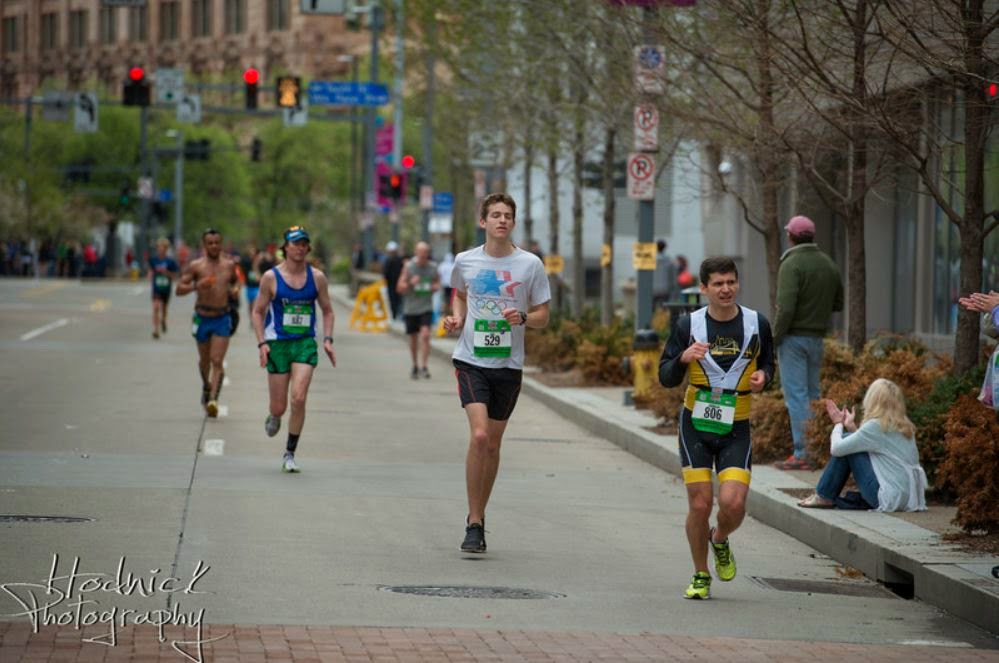 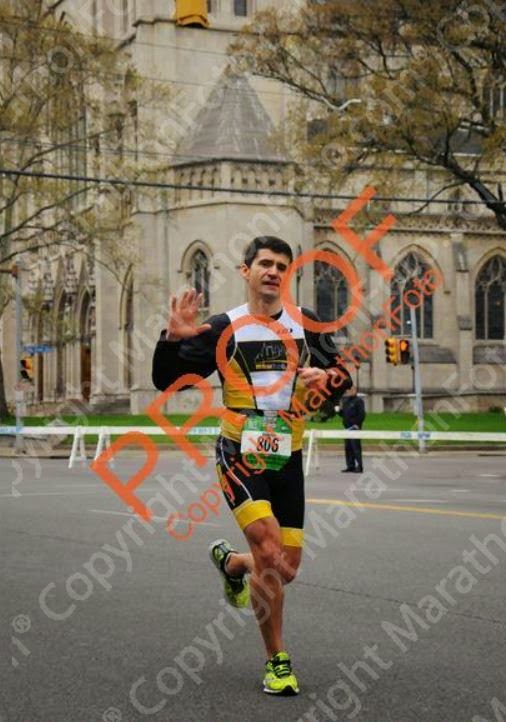 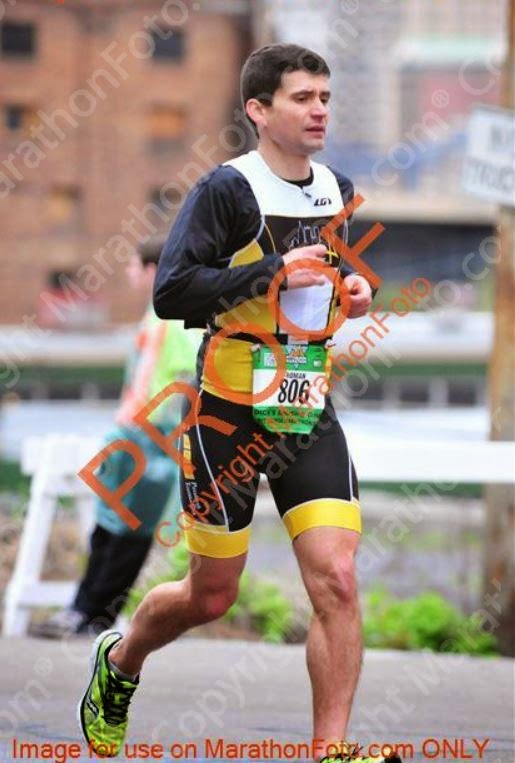 At mile 14 I was caught by the 3:20 pace group and stuck with them all the way until the end of the race. This took constant GPS watching off my plate and I could simply concentrate on running. However if not for this pace group, I am not really sure I would have been able to maintain the pace that I needed on my own. First half went by very easily with no significant effort, but second half started to be progressively harder. Over the distance of the race I walked twice for 20 seconds each time. First time I fully caught back the 3:20 pace group and have not lost any time at all, but on second walk I got behind pace group by about 15 seconds and have not fully caught them.

As last several miles got progressively harder, it was a great relief to hit the downhill at about mile 23. I passed pace group by about a minute thinking I could run a couple of minutes under 3:20, but one mile before finish they caught me again. Last two mile were pretty hard and I felt something that looked like a beginning signs of cramps on the right side and decided not to push the pace for the fear of locking up, not to mention that it was pretty hard. I swear that if they made finish Gate visible from mile 24, I would have run a LOT faster, but the way they laid it out - you do not see the finish gate until about 100 yards away from it after you make a right turn into Point State Park. This has got to be a consideration! Make the frigging finish shute visible, damn it! :-).

I must say that spectators and scenery on the course was pretty awesome. I felt like the city belongs to runners this day (and it did). There were lots of funny signs, but I stopped paying attention to those after the first half as I had to concentrate on my pace.

The best part was that I knew my wife and son are waiting for me at the finish line. I kept their images in my head for the last few miles when times were tough - and it helped. Would have been harder if they were at home and I had nobody waiting at the finish line. 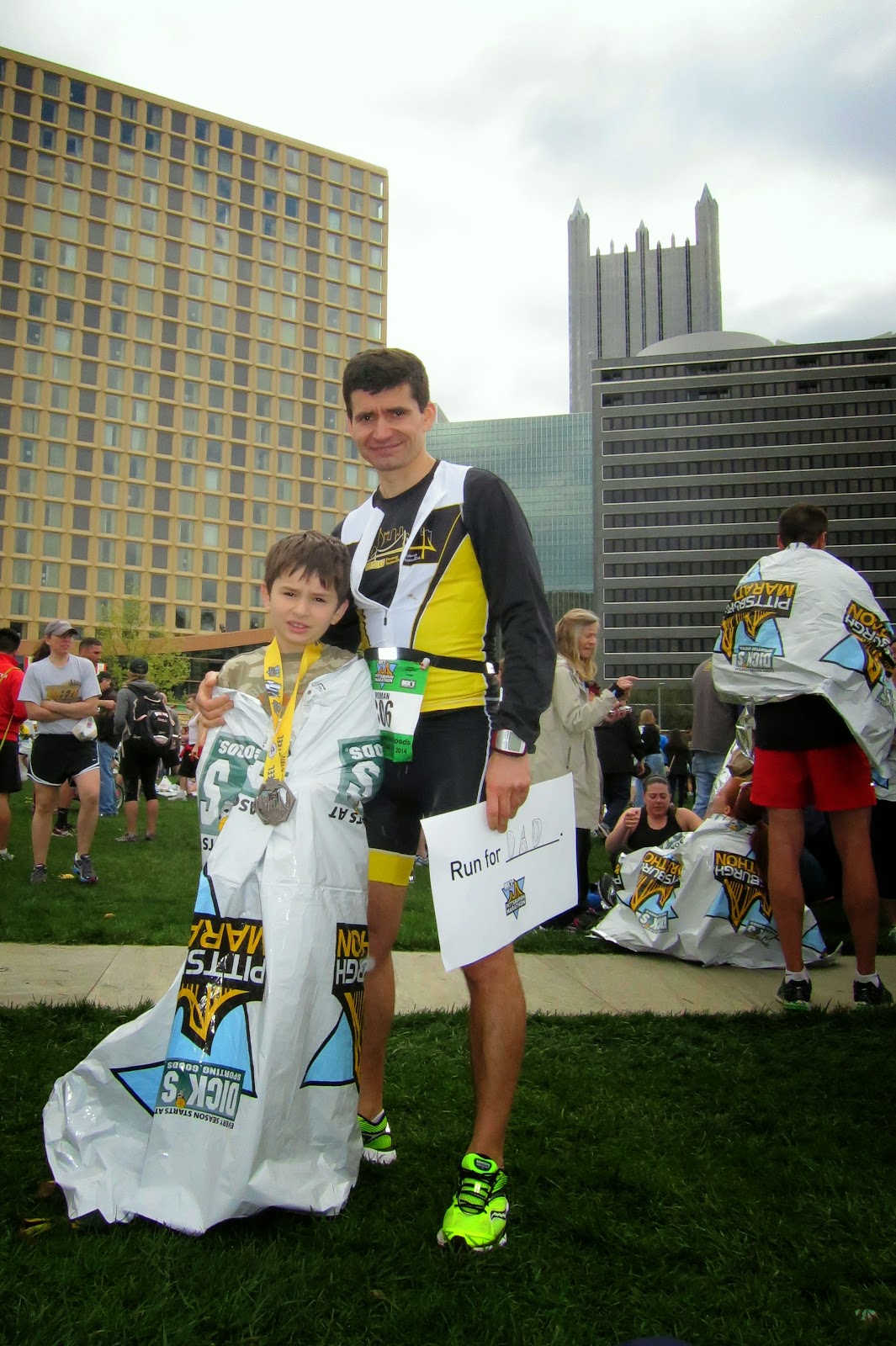 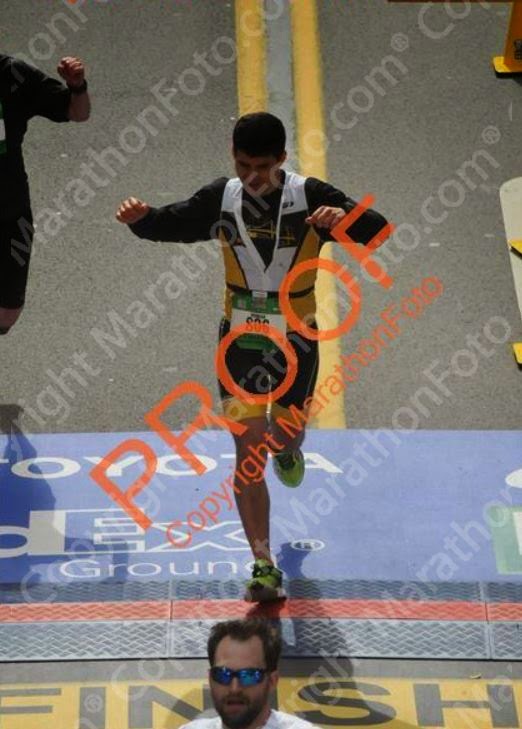 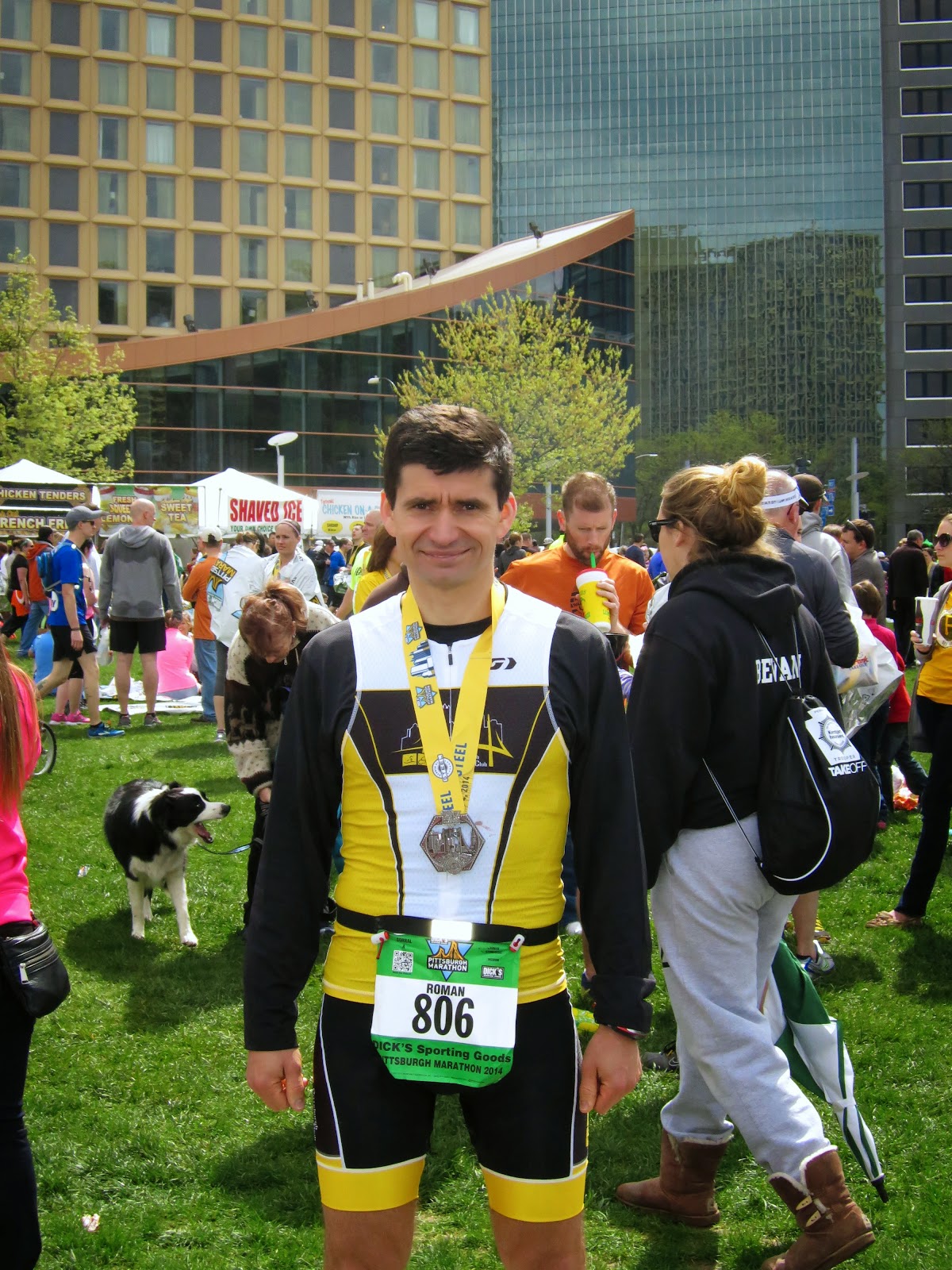 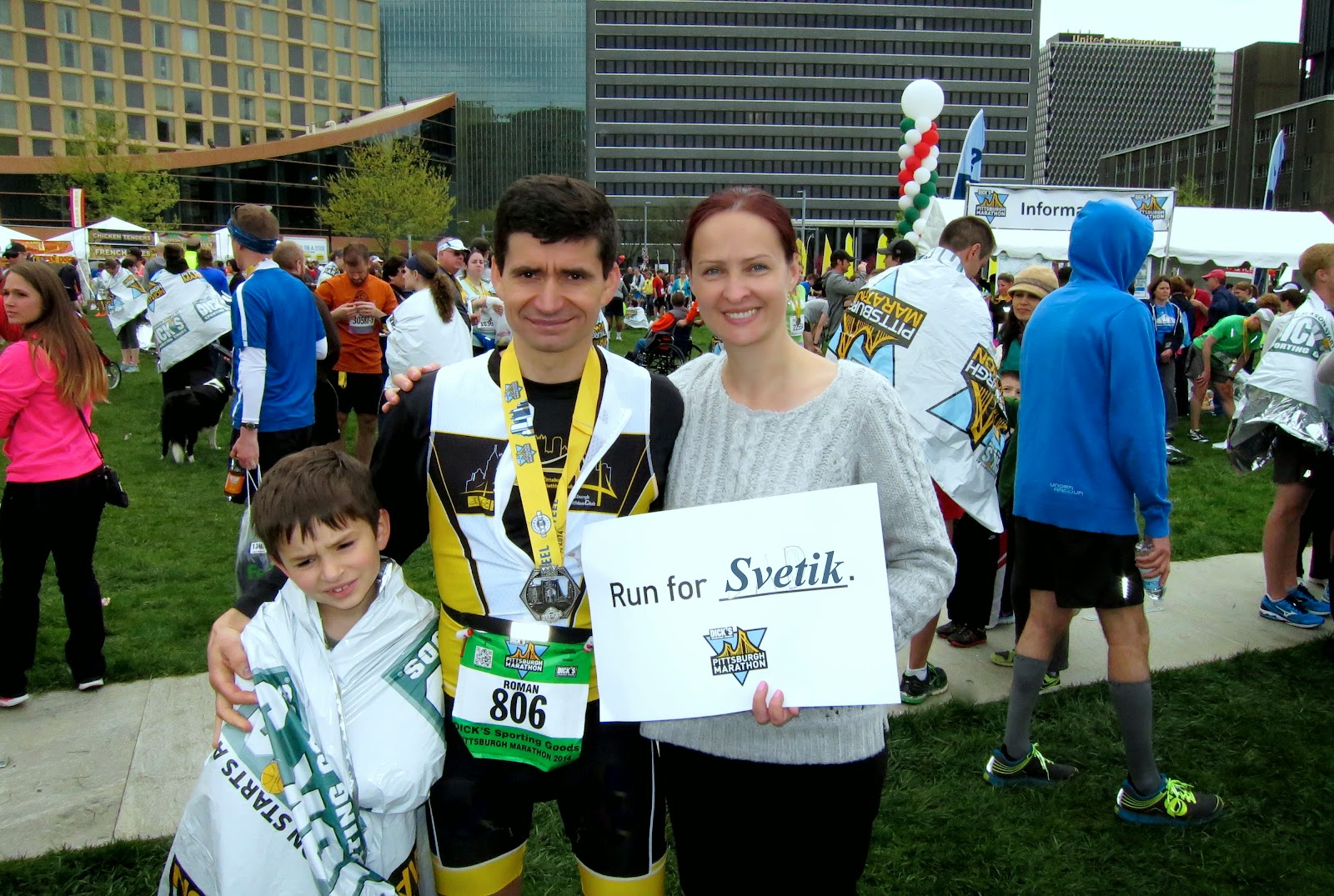 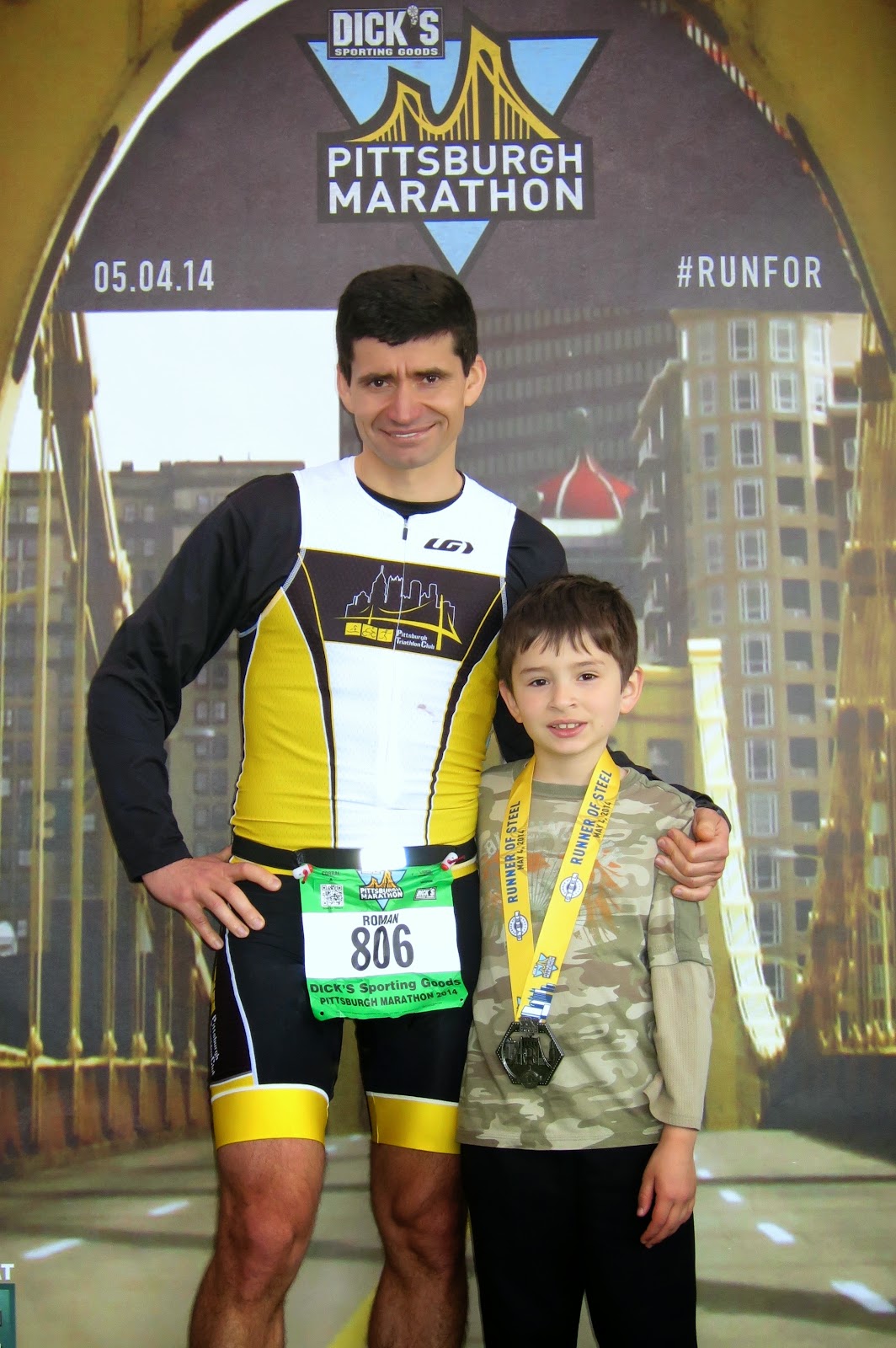 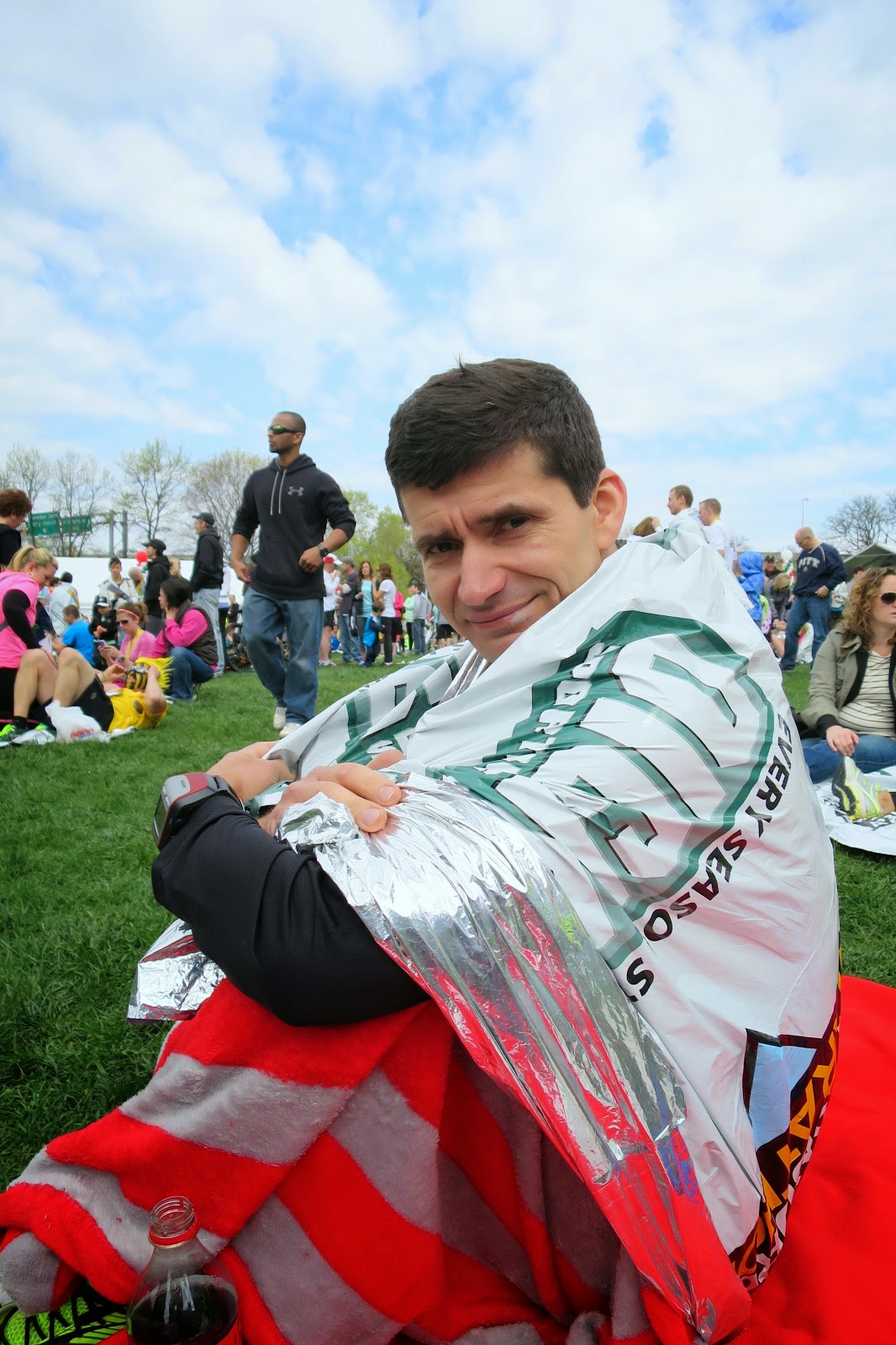 At home for recovery I made myself a smoothie on my Vitamix with frozen mangos, chia seeds, carrot, bananas, yogurt, honey, frozen berries, avocado. Drank 3 cups that day and another 2 cups the next morning before leaving for the airport.

Once I got home from the race, it was *very* painful to talk those stairs for two days... I don't think I had that after my first marathon. To make matters worse, the next morning after the race I boarded a plane and flew 1.5h to NY, then 15.5h to Hong Kong and another 3.5h to Kuala Lumpur. Did not get to walk much and had to sit on that plane for almost 24 hours. Not a good thing for recovery. No more DOMs after 4 days. But here in KL before and after having business meetings I got to swim in hotel pool, biked and today (Saturday) ran for the first time after the race. In fact today I did 45 min cross training in the morning and in the afternoon swam 2000 meters, biked 18 miles and ran 3 miles - more than a spring triathlon :-).

Have not decided yet when to run the next full marathon. Perhaps next year? Or may be not. One of the ideas is to pace someone for the 4 hours run. That would be like a slow long run - training run. Really not sure what comes next.