Three days in Paris and 5 hours in Versailles

Last week from Madrid I flew directly to Paris for 3 and a half days. There I hosted an education session for IBM sales folks and met with several IBM customers. I am surprised how well business people speak English in Paris. Not so with taxi drivers :-). One night with my two team mates we went to the traditional French restaurant. Drum roll... and that is where I tasted snails. Turned out to be quite good, especially considering that there was a ton of garlic and spices. I doubt it would taste like much without all this flavoring, but you could say this about almost any food.

The definite highlight of the trip was my visit to Versailles. I had 5 hours to visit the palace on Saturday. What a beautiful place it is!!! One thing I do not understand - why the king's and queen's bedrooms are separate? Did he (or she) snore? :-) Ok, I know kings in France had mistresses, so they needed separate bedrooms. But as much as this palace is beautiful, it does not seem to be designed for living. Entire design is built around showing off the wealth and power, not private quarters where you can relax. There are several floors in the palace - I wonder what else is there - the stuff off the beaten tourist path? Wouldn't it be nice just to wonder around anywhere you wish?

The garden beautifully complements the palace. I only had 1 hour left to walk around, so there is a good reason to come back in the future. I can only imagine how much work is needed to maintain it all in such perfect shape. At the same time, I figure at the $36 entry fee and about 3 million visitors per year (source), they can afford to keep it look pretty :-). The weather forecast the night before predicted sun in the morning and rain starting at 1pm. I had to leave to the airport at 1pm anyway, but was quite surprised when sun disappeared and rain started at 12:50pm. I think French weather folks do much better job than their colleagues in US :-).

I took quite a few photos - click here for the full album. I also have posted photos from my earlier trips to Paris in this album.

Here are just a handful of shots from this trip: 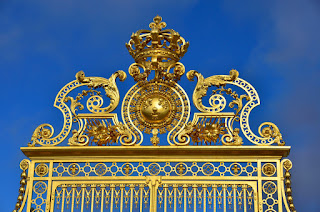 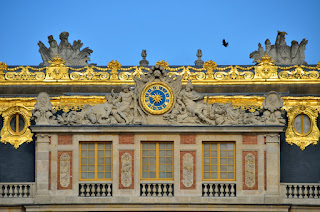 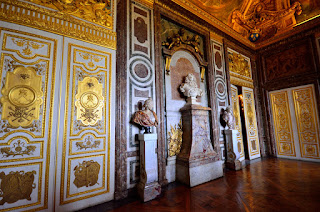 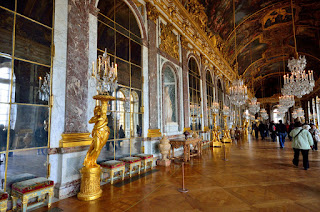 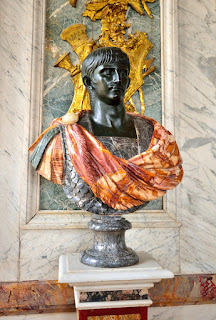 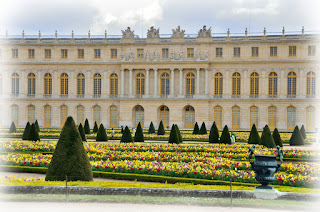 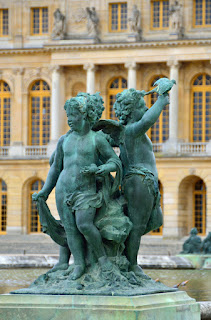 Email ThisBlogThis!Share to TwitterShare to FacebookShare to Pinterest
Labels: Travel

While running for the past couple of weeks, I have listened to "Origins of Life" by Professor Robert M. Hazen, Harvard University lectures. Great course! To spoil it for you - there is no answer to the question. Professor Robert Hazen does not pretend that modern science knows what the true origin(s) of life is (are), but he presents several theories and ongoing research in this area. I must note that Robert Hazen is a great speaker and is very engaging. This is not a "dry scientific" class. This is fun and easy to understand science.

The first lecture gives a quick history of how humans viewed the subject over years and explains theories from ancient Greeks to our days. Some folks thought that life was always "there", others thought it was born when air water and fire came together, etc. There were some experiments with water in sealed containers vs. open containers where water was contaminated and debates over how "life" came into those containers. Professor Hazen gives several examples of debates over years between different scientists and their early crude experiments.

The third lecture discusses the very difficult question - "What is Life?". Can YOU define Life? What is it? How do you know something is "Life" and something is not? It appears there is no agreement in the scientific community on this subject today. There are dozens of definitions, but none that is universally agreed upon. Isn't it amazing that in 2012 there is not clear scientific definition of what the life actually is? Is computer Artificial Intelligence = Life? Is robot alive? Is organic molecule alive? One of the "Life" features is that it is self-replicating. But crystals, fire and other things are self-replicating too. Another characteristic of "Life" is that is responds to external stimulus. But so does water, air and other things. So what is so unique about "Life"? Even until this day there is no clear answer. It seems that so far one of the more popular definitions of life is this: "Any population of entities, which has the properties of multiplication, heredity, and variation.", which means that Life needs to posses the information that passes information from one generation to the next, yet it must display variation - i.e. evolution by natural selection.


One of the lectures covers the topic of "emergence" and "complexity". How do you measure complexity? How do complex forms appear? There is also a very interesting discussion about the Schrödinger's "paradox". Quoting wikipedia: "In a world governed by the second law of thermodynamics, all closed systems are expected to approach a state of maximum disorder. Since life approaches and maintains a highly ordered state - some argue that this seems to violate the aforementioned Second Law implicating a paradox. However, since life is not a closed system, there is no paradox. The increase of order inside an organism is more than paid for by an increase in disorder outside this organism. By this mechanism, the Second Law is obeyed, and life maintains a highly ordered state, which it sustains by causing a net increase in disorder in the Universe."

Indeed - how is it possible that all this "random" set of  atoms and molecules has organized itself into a highly structured and sophisticated assembly of multi-million collections of molecules that we call life? How do those molecules know "what to do"?

One of the lectures in this course talks about the meteorite from Mars - this is infamous Allan Hills meteorite which cause so much controversy when NASA declared that it found life on Mars based on analysis of this meteorite. Here is a wikipedia article on this: http://en.wikipedia.org/wiki/Allan_Hills_84001.

Another lecture talks about several ways one can use to detect life when fossils are not available in the rock. There are methods using carbon weight distribution - comparing the proportion of Carbon 12 to Carbon 13. Organically produced materials tend to have much higher percentage of Carbon 12 compared to non-organic materials. There is great deal of explanation how and why this is done in the lab, the type of equipment used, etc.

I also loved the lecture that covered the Miller-Urey Experiment in which organic molecules were produced by combining heat, electric sparks and non-organic materials, including water, methane, ammonia, hydrogen. The experiment was done in 1952 and produced over 20 different organic molecules and it is believed that this was a mechanism by which first life building blocks were created 4 billion years ago. Almost 100 years before this experiment, Darwin also suggested similar theory, but he never published his thoughts on the subject - partially being afraid of trouble from "creationists" (and church).

Lets assume we found out how Life came to be. Even bigger question is - where did all the matter come from in a first place? Big bang or not big bang - all this stuff around and inside of us had to show up from "somewhere". I can't accept the answer that it "always existed" nor do I accept theological theories. I am afraid it may take a long time to find this one out...

I just re-read my post above and it feels very dry and boring. Trust me - the lectures are nothing like it. It is so much fun to listen to this course and learn all this stuff. I am not listening to latest episodes of radiolab.org, endurance planet or any other audio, until I finish this :-). And when I do finish, Professor Hazen has another course called "Joy of science". As luck would have it - my library has this course.

I will post updates to this as I continue thru these lectures. For now I am only 1/3rd of the way thru.
1 comment:

As some of you know, my house is located right next to the golf course. Having lived in it for the past 11 years, I have never played golf. This past weekend kids and I finally did it! It was the first game of golf for my boys and for me! That was a lot of fun. I knew it is not an easy game, and it turned out to be just as hard as I expected. I started counting my strokes on a first holes, but quickly abandoned that idea. It was interesting to watch other golfers play - now I had a different perspective. Amazingly, there are people playing on this golf course starting at 6am in the morning. Next time we play we need to have golf clubs for everyone, not just one set of clubs for the team :-). And we sure will not take a golf car next time - it was fun to drive, but was a drag. 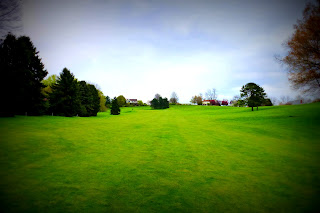 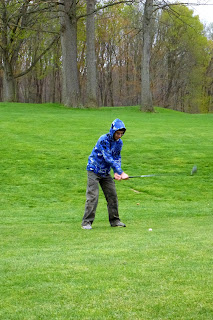 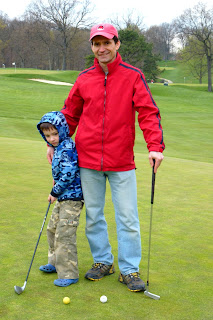 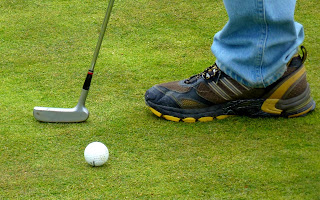 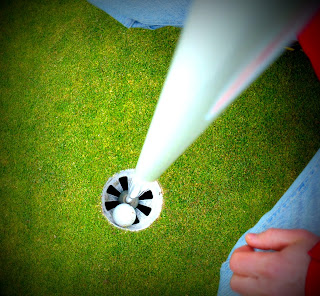 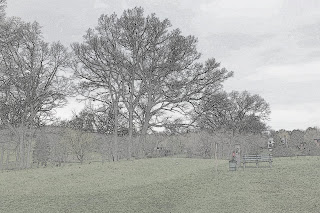 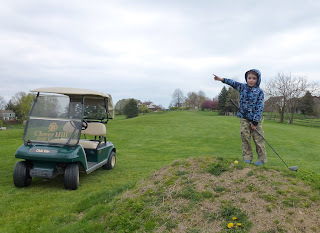 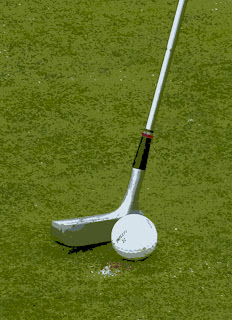 Email ThisBlogThis!Share to TwitterShare to FacebookShare to Pinterest
Labels: Things to do

All of last week I have spent in Research Triangle Park in North Carolina at the IBM lab. This was my 10th time to RTP lab. I love RTP - such a great place to live (almost as good as Pittsburgh :-). Back in 2005 I have spent 6 weeks there writing IBM redbook. At that time I took my mountain bike with me and was able to visit many local mt bike trails.

We had a great group of people who came from all over the world  - USA, Germany, Belgium, India, Italy, Egypt. We had a pleasure of working with IBM Distinguished Engineers and architects on the IBM Expert Integrated Systems - to be announced with a big bang on April 11. I wish I could tell you more about this, but I can't :-). This is very very exciting. While in Raleigh, I was recorded on video - here it is:

One of the best moments of last week was a soccer game between all the "visitors" and "hosts" - where we won 9 to 3 :-). To be fair "hosts" gave us their best guy, who used to play soccer semi-professionally. He did not try too hard, or else the score would have been 100:3. Still after 2 hours of this game I had sore muscles for the next 2 days. I guess soccer makes you use different groups of muscles and in a different way (anaerobic) and my triathlon training made me survive the game well, but did not help with the next two days - I had to use my hands to lift feet in and out of the car :-)). 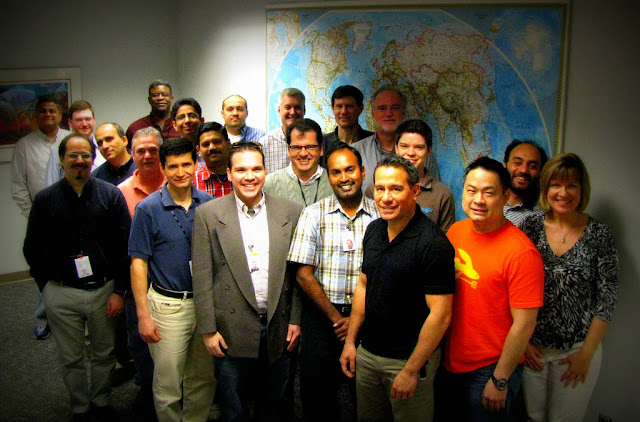 One thing I did not like was that the Fairfield hotel gym did not have bike trainers, so I went entire week with no bike mileage. Only running in the neighborhood and swimming at the local YMCA (25 min drive). Next time I stay somewhere for a week or more I will call hotel in advance to check if their gym has bikes or not.
No comments: