I have been lucky enough to be able to see the world. Handful of those trips were family vacation, but most of them were for business. On the image below I used Google maps to create a virtual map of the places I have visited and I counted about 34 countries (including former Soviet Union countries) and about 140 cities and towns. A lot of these places and countries I visited multiple times (Las Vegas about 10 times - all work :-), Orlando - about 7 times, Japan twice, Australia three times, France 4 times, Germany 4 times, China 3 times, UK 4 or 5 times, not to mention countless trips to Washington DC, NY, etc.).

Lets just say that I acrrued (and spent) several million frequent flyer miles over the past 14 years being in US, not to mention my travel when I lived in Russia. In fact, once it took me 9 hours to fly from Moscow to Khabarovsk - and all that time I was above Russian land territory. Quite a large country indeed, too bad all those resources are consumed by oligarchs and not by common people...

I do like travel, but too much of a good thing is bad, so I am trying not to overdo it. However when I do travel, I try to make the most out of it. I try to spend free evenings or weekends at the destination and always take my camera with me. Some photos can be found on my Photography page.

I also love local foods. I eat almost everything and it is always great to taste something unusual. For example, having been to India three times in the past two years, I fell in love with Indian food. Something I completely ignored until recently. I also love Turkish food, French, German, Thai. But nothing tastes as good as Russian cuisine, which is a blend of many sub-cultures that collectively make up Russia and former USSR.

Here is a snapshot of the travel map - this image is static and is current as of March 2013, but if you click on the image, it will take you to the most recent update shown on Google Maps where you can zoom in and out, search, etc. It has been a lot of fun and a privilege to be able to see all these beautiful places. I wish more people could do this. Thanks to IBM for "sponsoring" me on these trips (I hope IBM got good return on its investment :-) by sending me around the world). 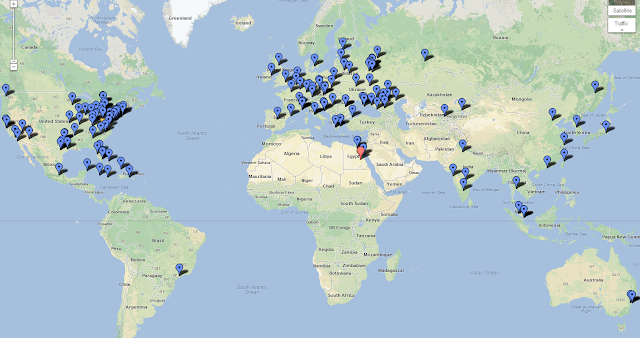 Update March 26, 2013: I added links to photo albums to many of the visited places. Once you open the map above, see list of locations to your left and click on the location of interest, then click on the URL to view photos I took during that trip.