The Perfect Mile: Three Athletes, One Goal, and Less Than Four Minutes to Achieve It 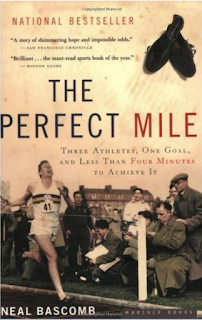 Just finished the audio version of this book. Absolutely one of the best sports books I have enjoyed so far. This book is beautifully written and you can't put down once you start it! The plot is real and fascinating! The story tells how three runners in 1950s attempted to break the 4 minute mile barrier, which was once considered to be impossible. Those runners were Roger Banister of UK, John Landy of Australia, and Wes Santee of US.

I do not want to spoil the book for you and tell who was the first runner to accomplish this goal, but I bet even non-runners would love this book. You just can't find too many stories like that, with so much drama, action and amazing examples of the best that humans have.

Wikipedia has a great article documenting the history of the one mile records. SPOLIER ALERT: Do not look at it before you read the book! Here is the article.The current mile record was set in 1999 and is 3:43.13. Amazing.

All this one mile stuff makes me want to try how fast can I run one mile. I will try some time later this year and will post my result. For now I am curios - can I run at least 5 min mile? This year my best pace per mile was 6m 27sec during the 3 miles run at the sprint triathlon (for those of you unaware this run is after 500 yards swim and 14.5 miles bike). My average pace at the marathon last year over 26.2 miles was 7min 43sec per mile. Compare that to the world record marathon pace of 4min 43 sec per mile! Isn't it crazy?

Email ThisBlogThis!Share to TwitterShare to FacebookShare to Pinterest
Labels: Running, Stuff to read