Last month I purchased a treadmill for my basement to be used by the whole family (guess who is really using it). We also have elliptical and stationary bike there. So we decided to put a smart TV on the wall. Since this is a new TV, it is the best one in the house and kids are often using it to play xbox. All of this requires me to be able to reposition TV on the wall depending on who is using it. The viewpoints are very different. Kids play xbox sitting on the floor, so the TV must be at their eye level on the left side of the room. When I run on treadmill the TV is pretty much against the ceiling on the right side of the room. When someone uses elliptical the TV needs to be in the middle of the room - centered between ceiling and the floor. Overall ===> this TV needs to be able to stay put on this wall anywhere from left to right wall, from the floor up to the ceiling. They do not sell mounts like this, so I decided to make one.

After some deliberation, I decided to use materials I already had from prior projects: 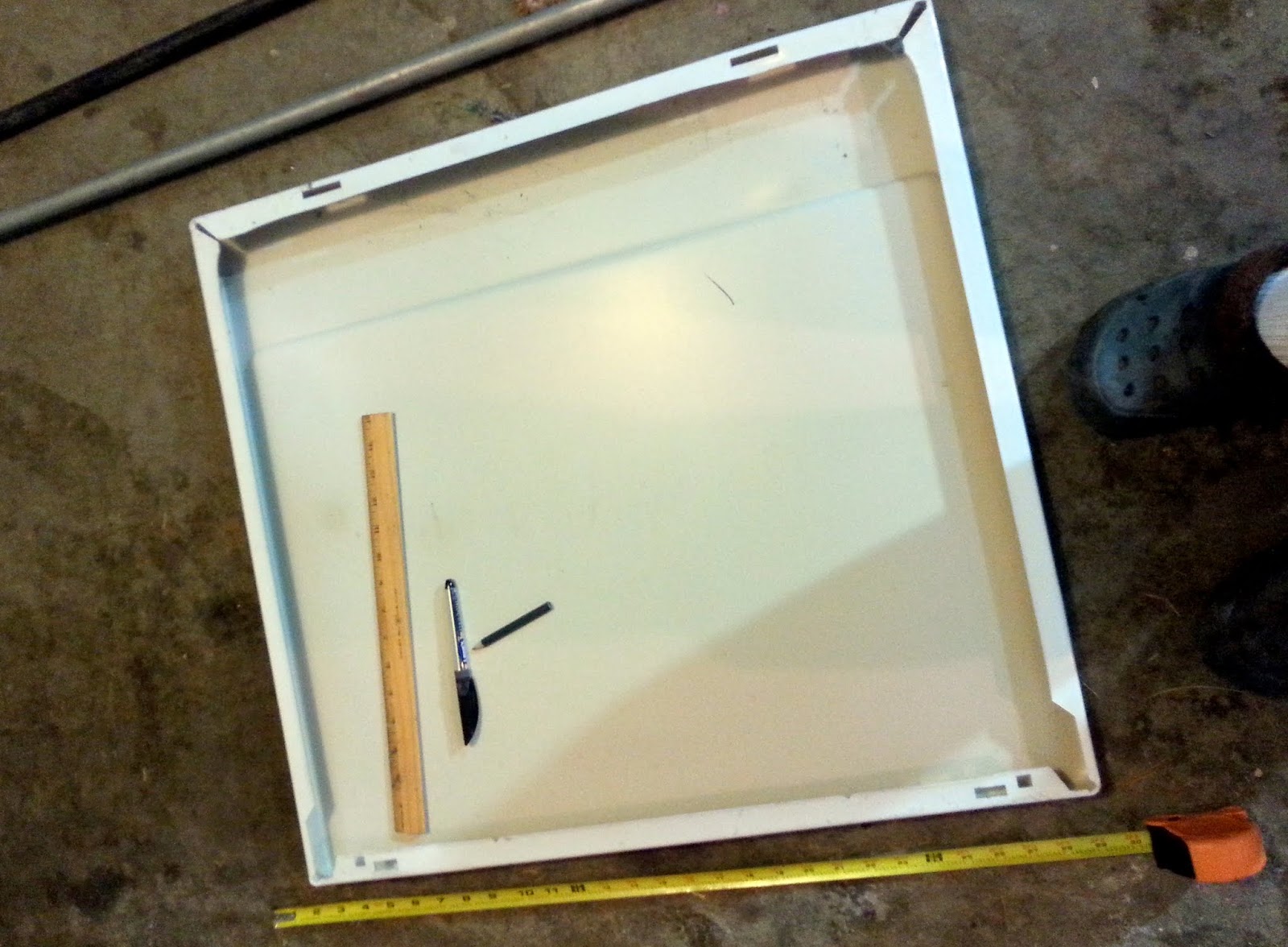 First - cut out the sheet of metal from the top of the old laundry washing machine (or use any other think metal and bent it properly: 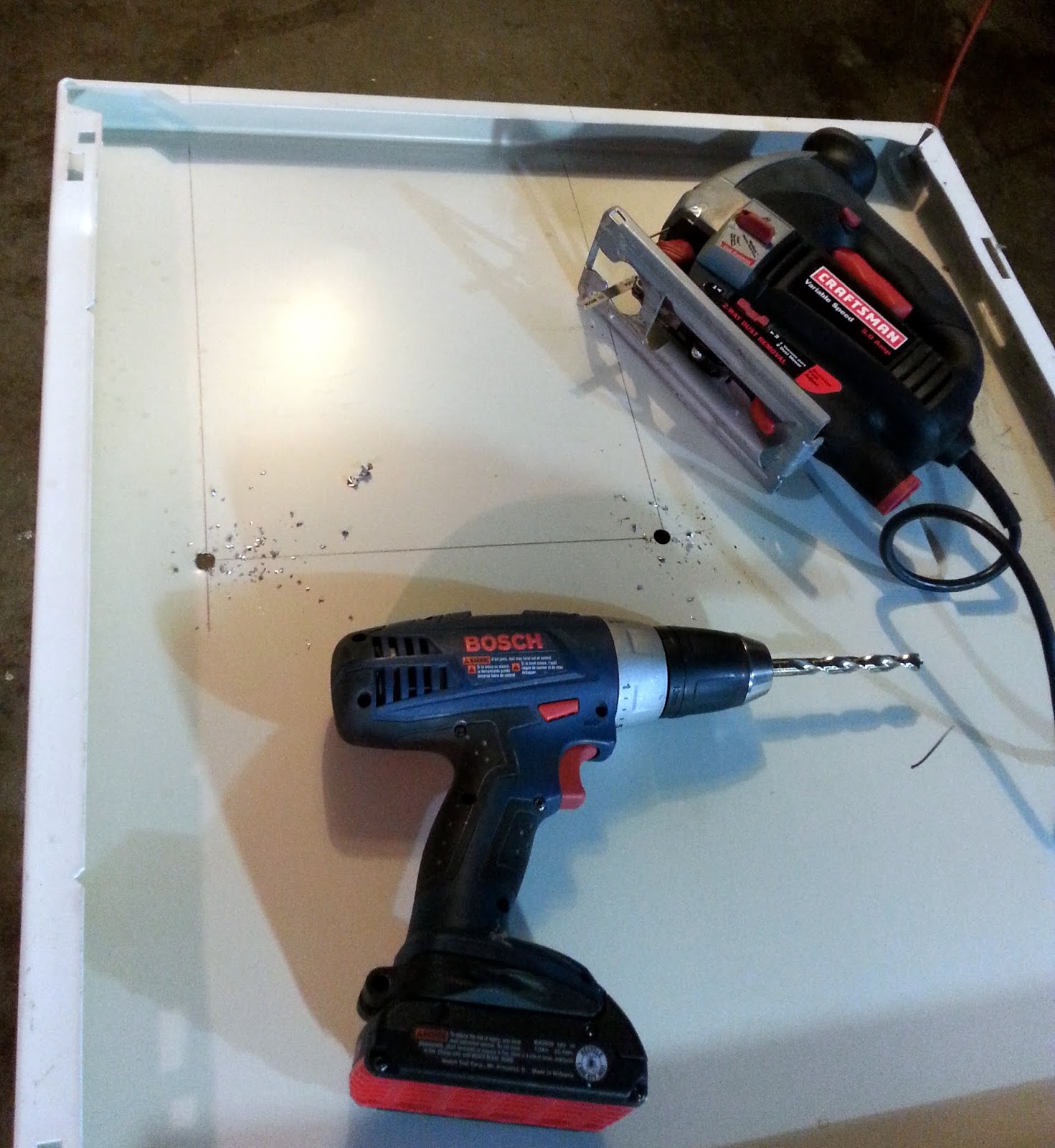 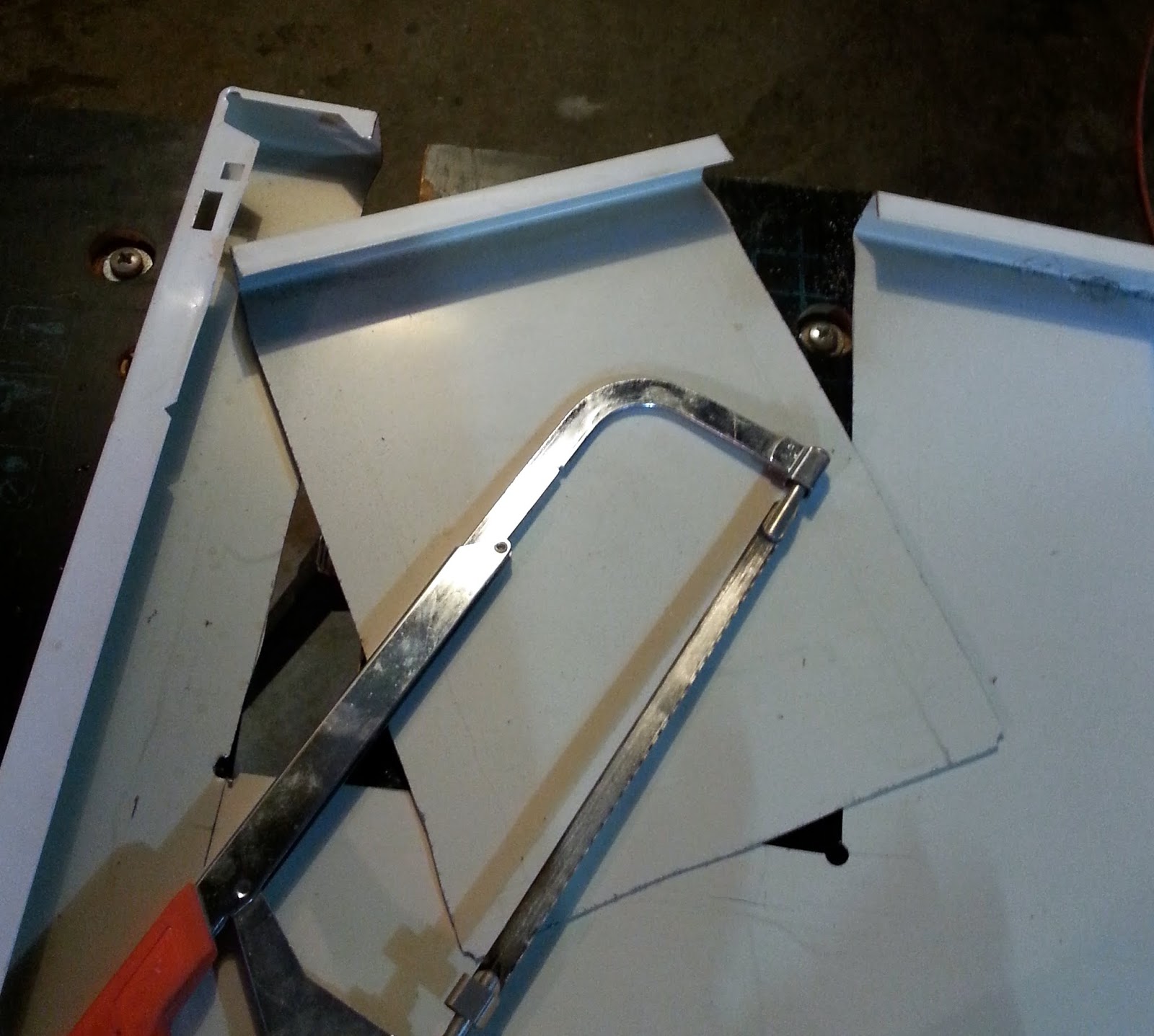 Once you complete the cut, make sure to file sharp sides of the entire piece to remove the edge. I filed it very nice so it is very smooth. Then mark holes to mount on TV by using a newspaper and then transferring the holes from newspaper into the metal and drilling those holes. The bent you see on the picture below is the one that was already on the piece and because it is a very think metal, it will hold the TV very well - there is absolutely no chance it will come undone - even if I put my own weight on it. You put your screws into the slots that are already on the back of your TV - these are the same slots you would use for any normal TV mount: 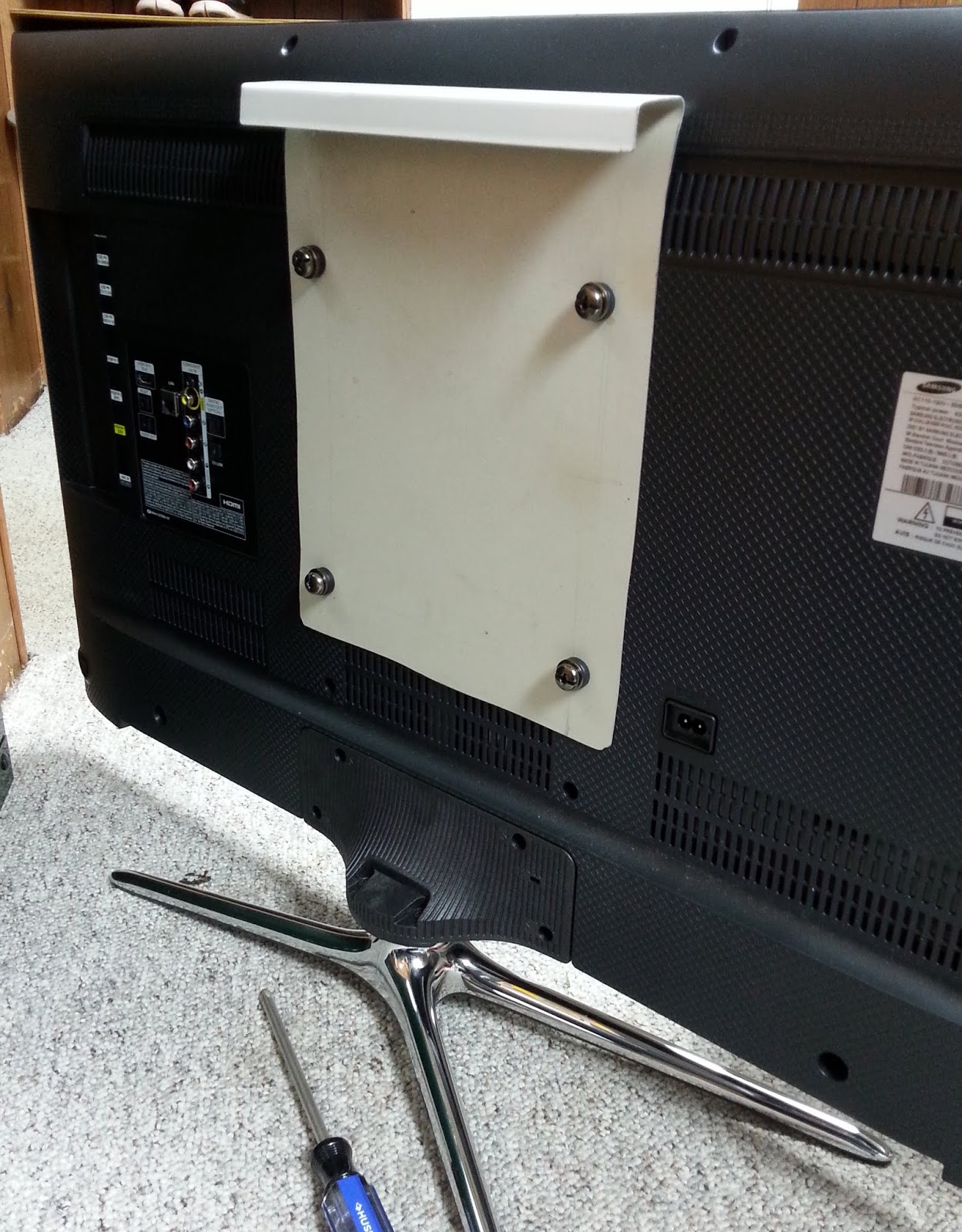 Since my basement room is wider than 10 feet and I did not want to purchase new pipes, I decided to connect two old gas pipes I already had suing threaded connector (see on the left pipe on the pic below). Make sure you screw it on very tight - as far as it gets. I use two pipe wrenches to make it super tight: 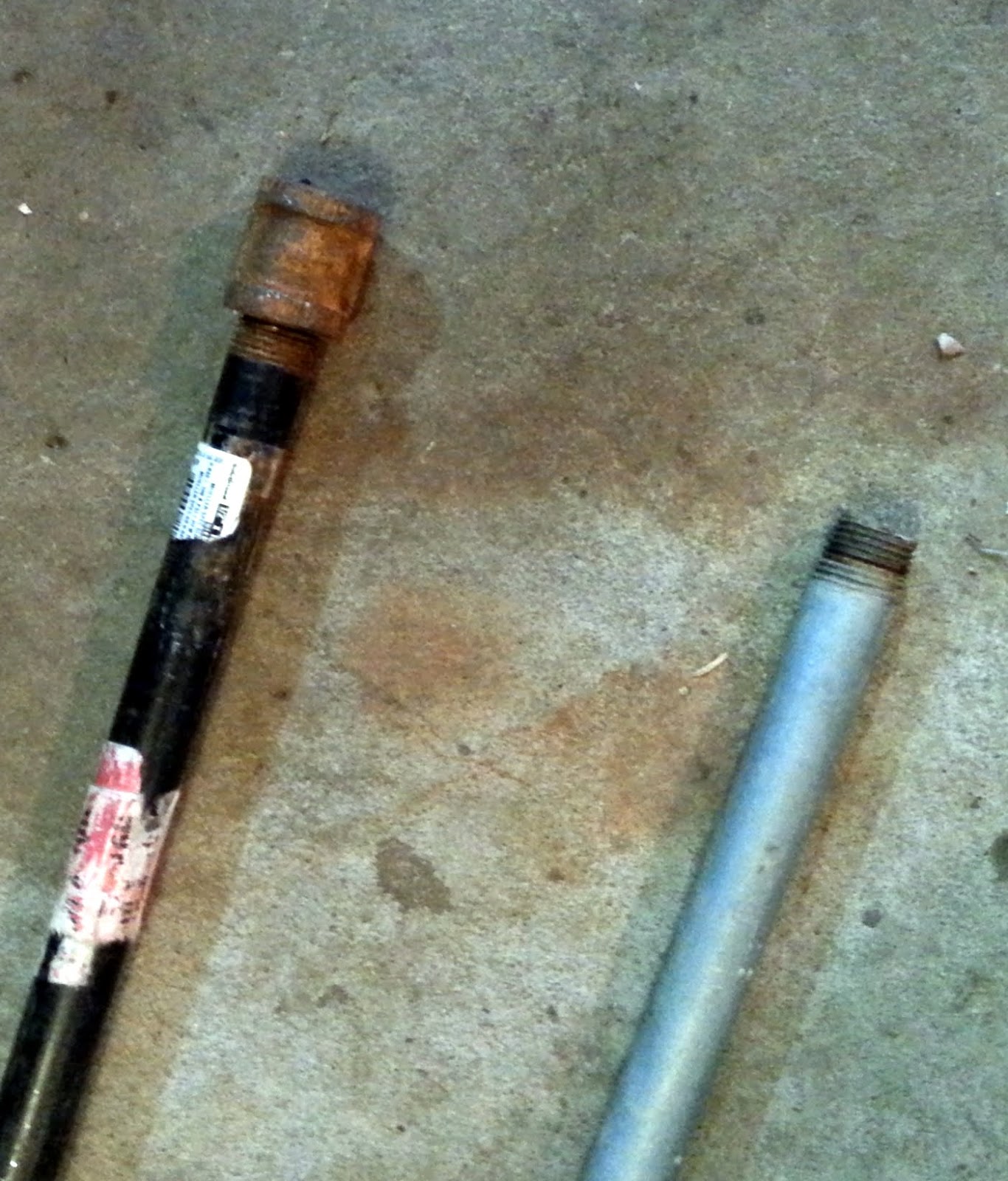 Once you connect the pipes, measure the distance wall to wall and cut one of the pipes so that it fits wall to wall with about 1/8" gap between the pipe and the wall to allow for error and seasonal movement of wall: 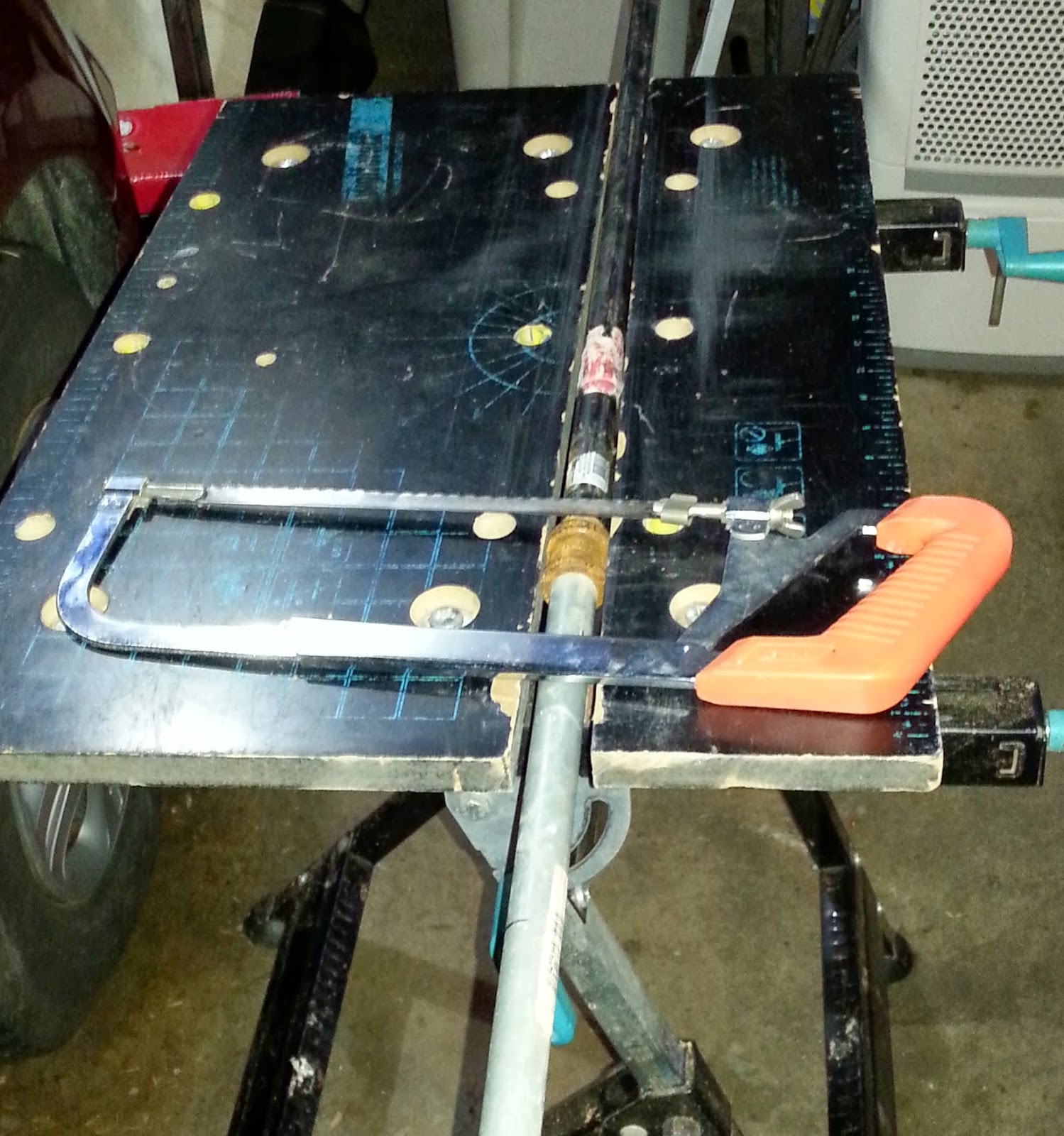 Now is time to make brackets - these will be used to mount the pipe into the wall. I made mine from the kitchen drawer that was never used - cut the needed length and bent at 90 degree angle: 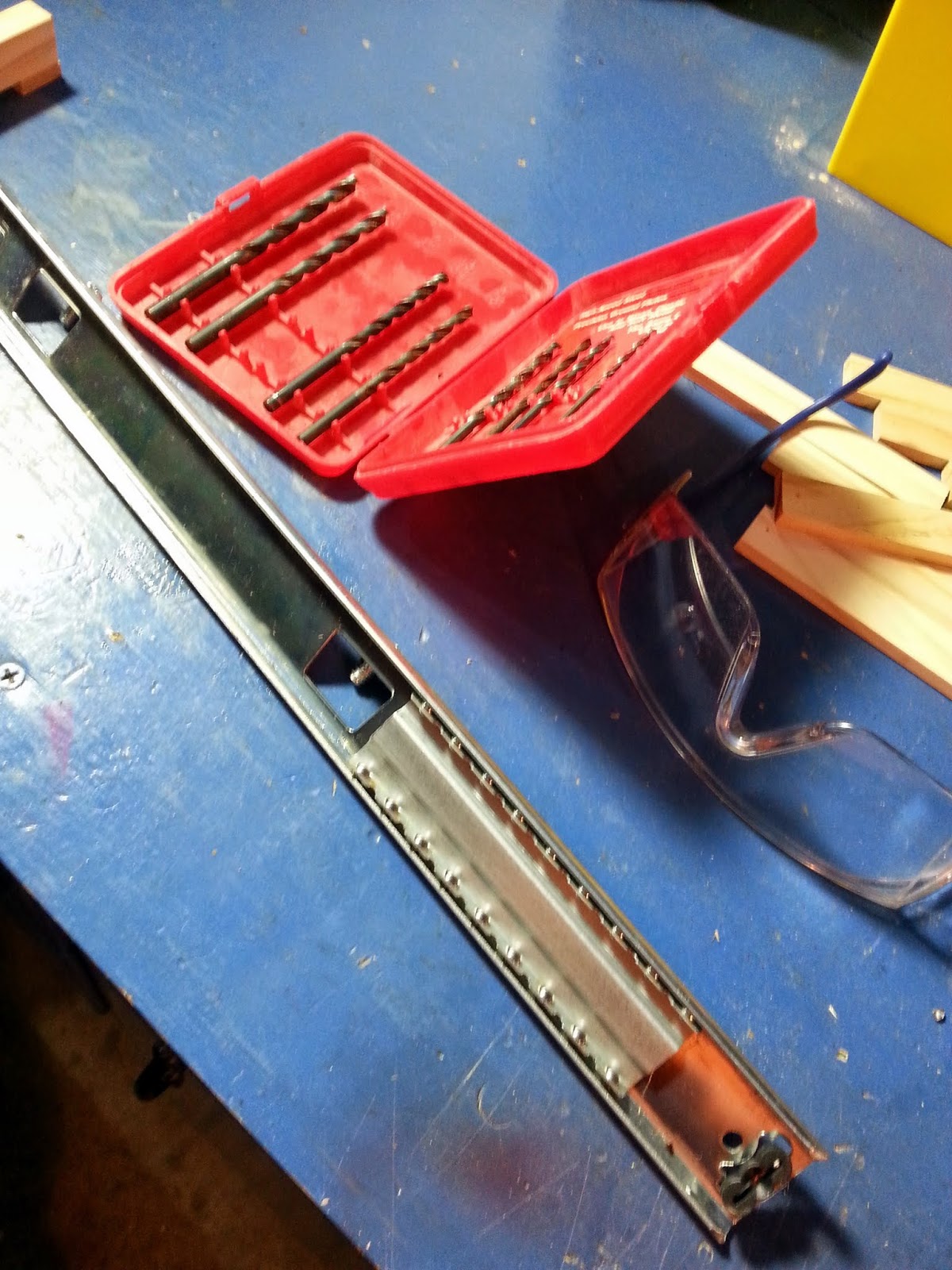 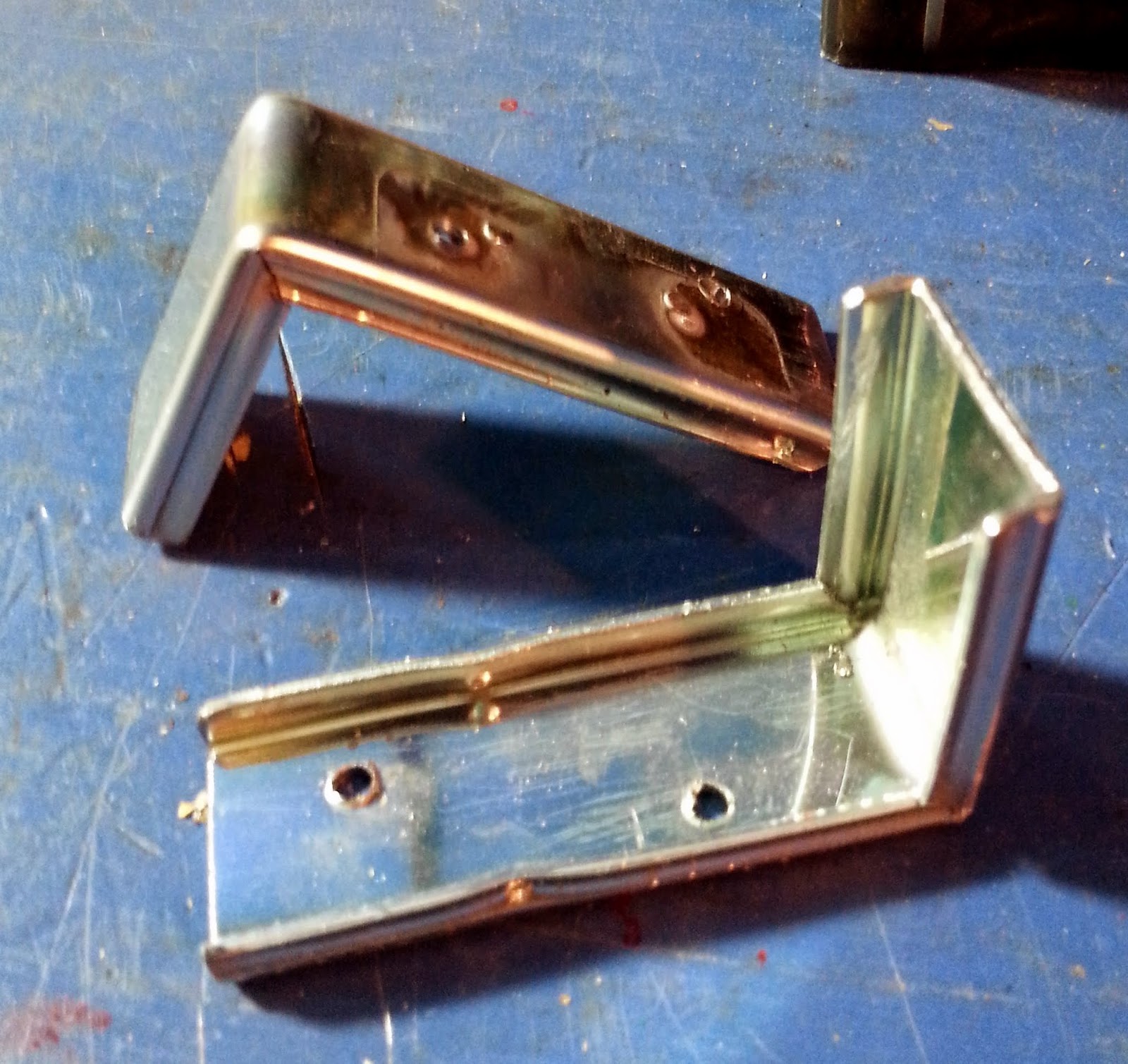 File all sharp edges from these brackets and drill two mounting holes in each. Now use stud finder to locate studs on your wall and attach brackets with 2.5" drywall screws to your studs on both sides of the wall. 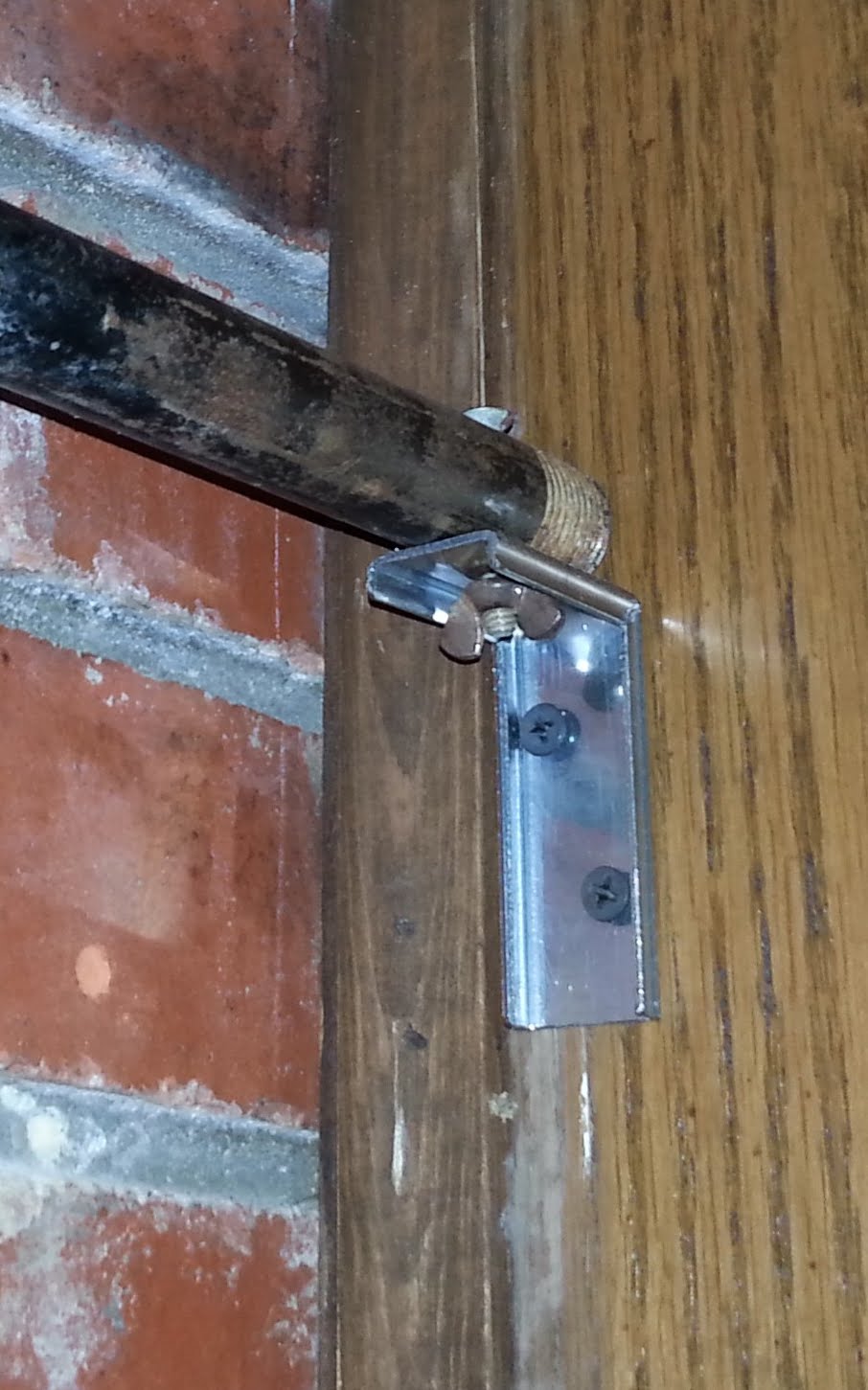 The first part of the TV mount is done - now you can hang your TV near the ceiling height and move it left to right by sliding on the pipe. See picture below - despite the looks, this is unbelievably strong: 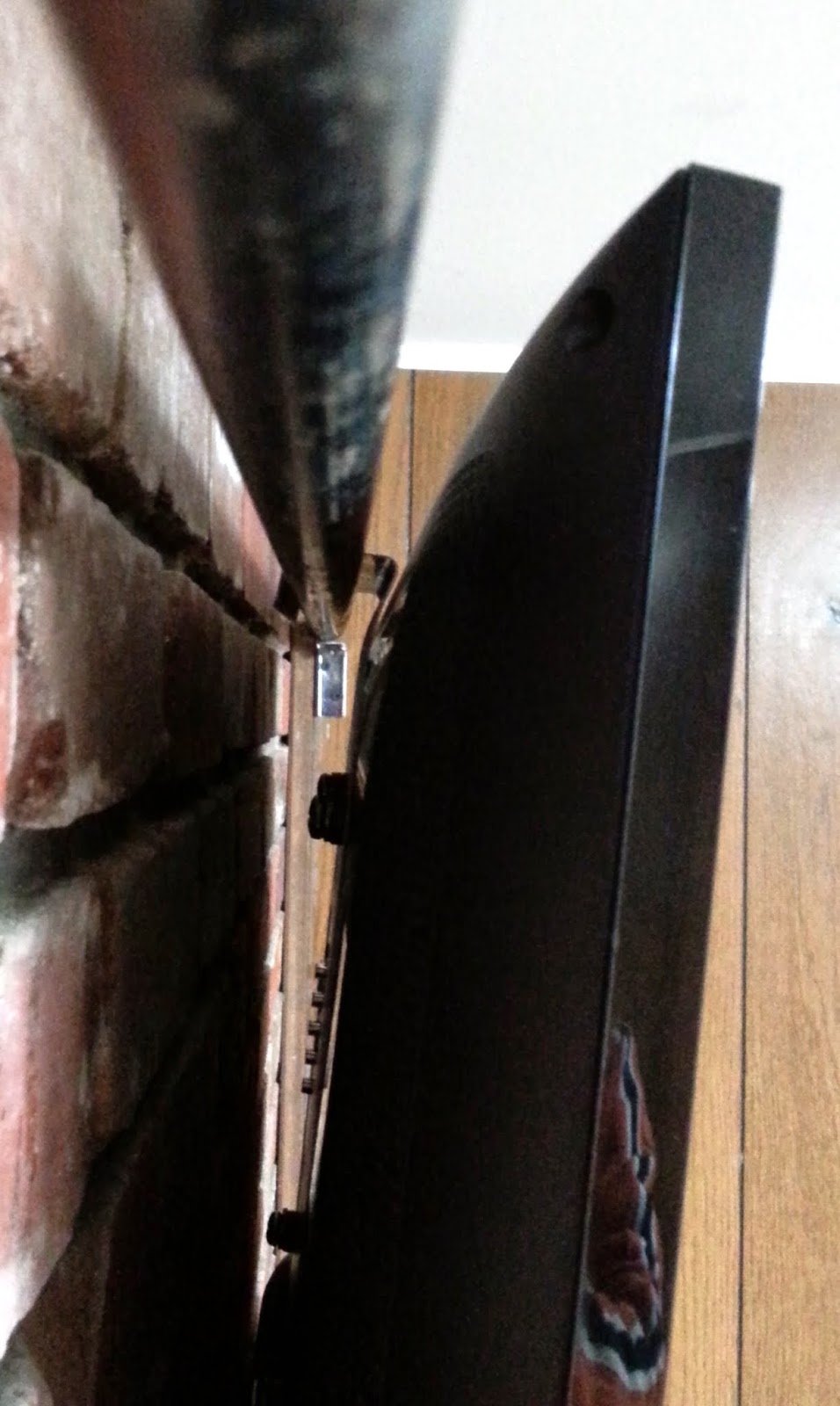 This is what it looks like from the treadmill: 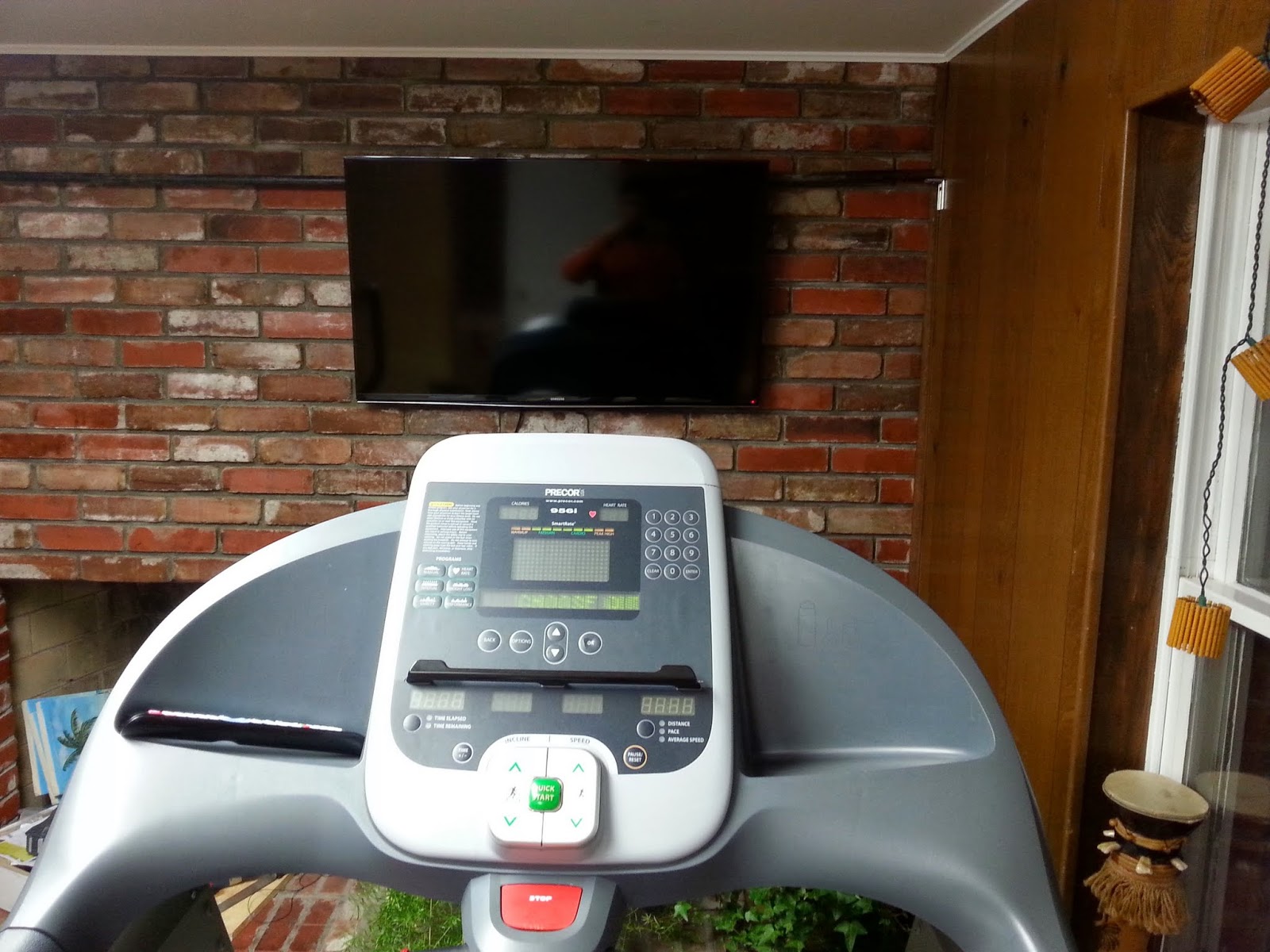 I used black duct tape to wrap around the gas pipe (you can use any color you like to match your wall): 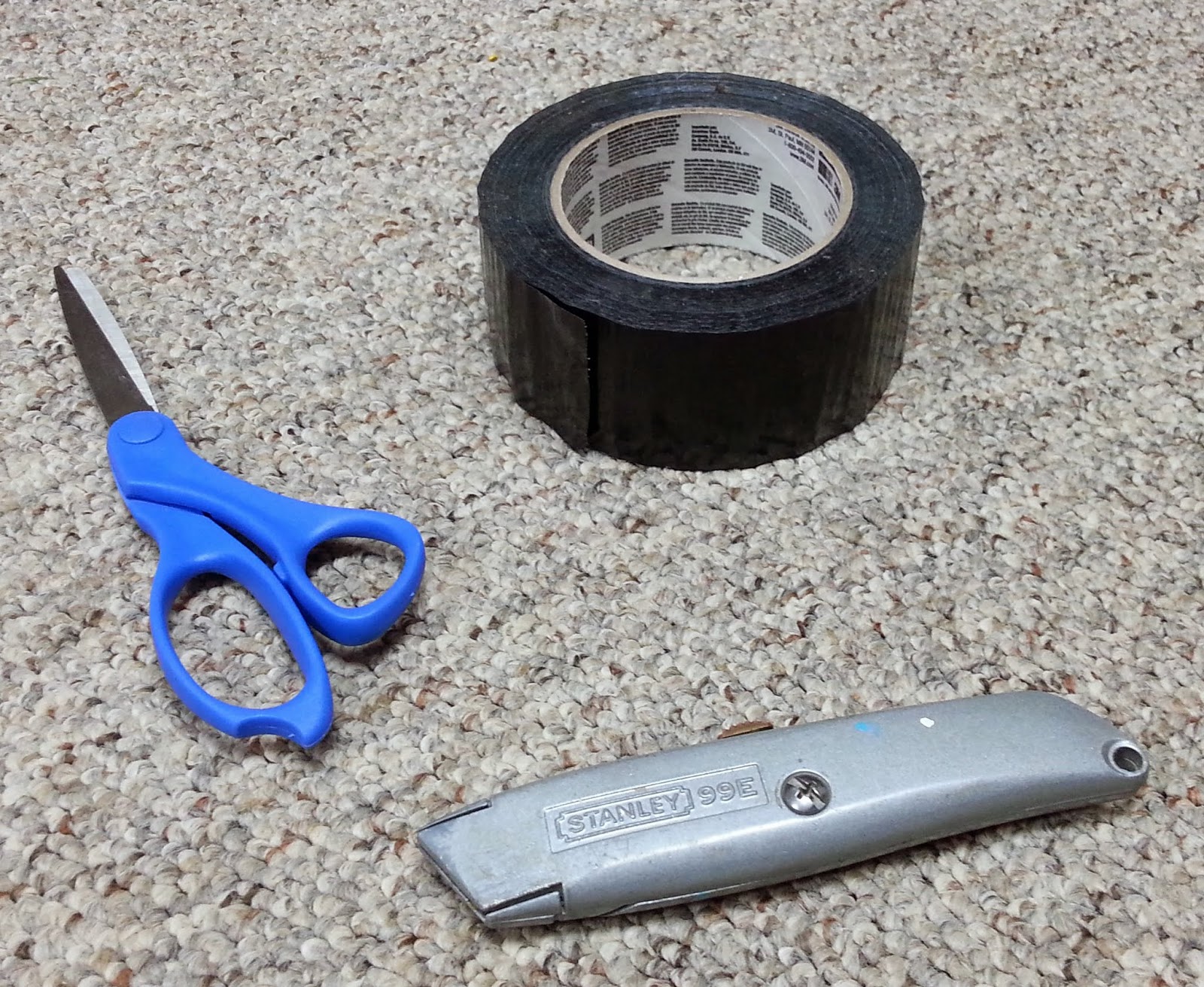 Here is how it looks when in use - but it is too high when kids play xbox while sitting on the floor (they move elliptical and bike to the back of the room): 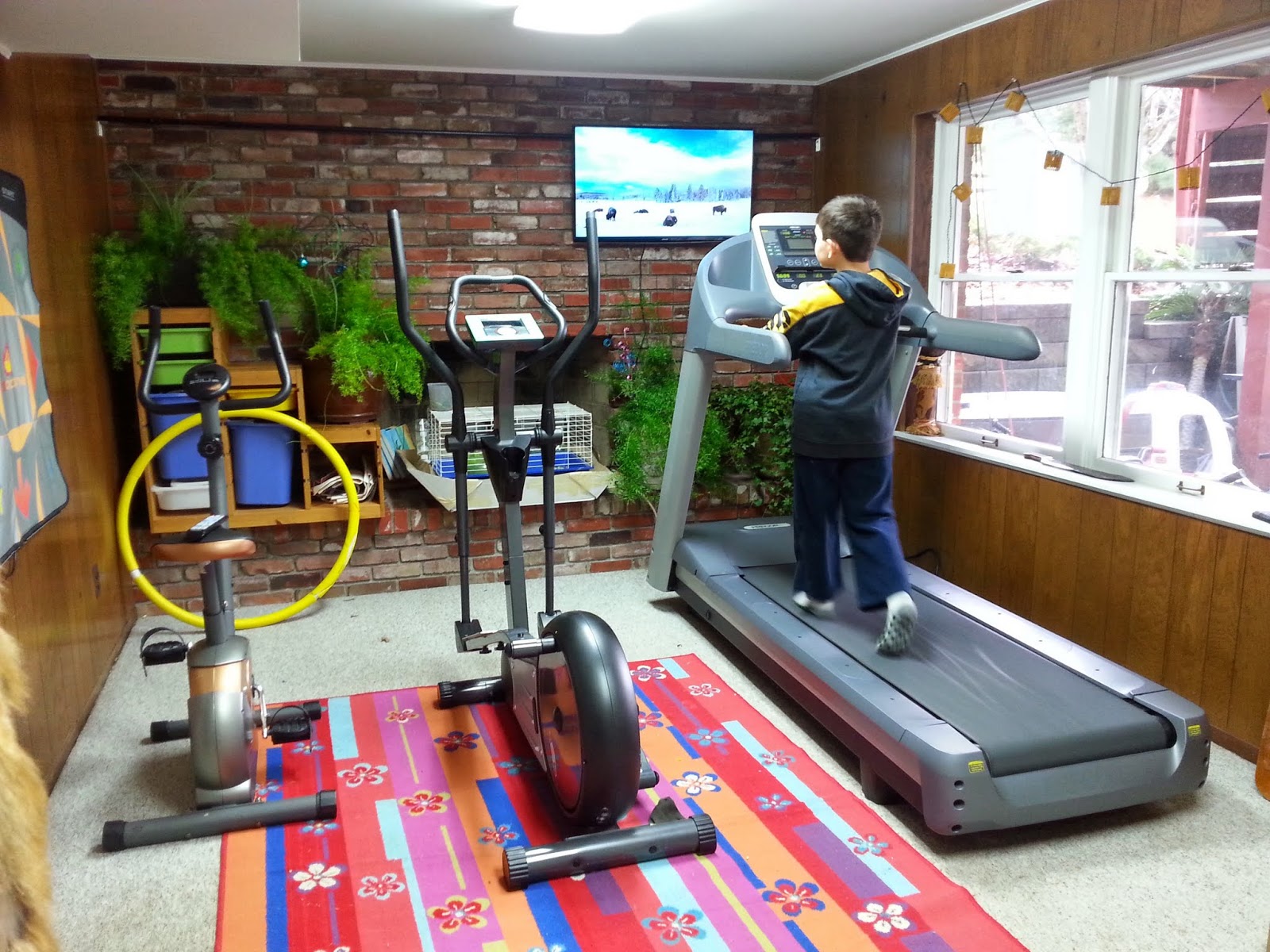 Next step is not only to allow for sliding of TV between left and right walls, but to be able to lower it to the floor. This is trivial - simply attach the metal cable (you can buy 16 feet of cable at HomeDepot - I used leftover cable from garage door project - 20 year old cable is more than strong enough for TV). Attach this cable to the gas pipe - one long cable attached twice (only one end of the cable is shown below):

Now - depending on how low or high you need your TV, wrap the cable one or more times around the "hook" as shown below and it will move the TV lower or higher on the wall - operation that takes only a minute - no screws, no mess. My kids do this easily and so far have not (yet) dropped the TV :-): 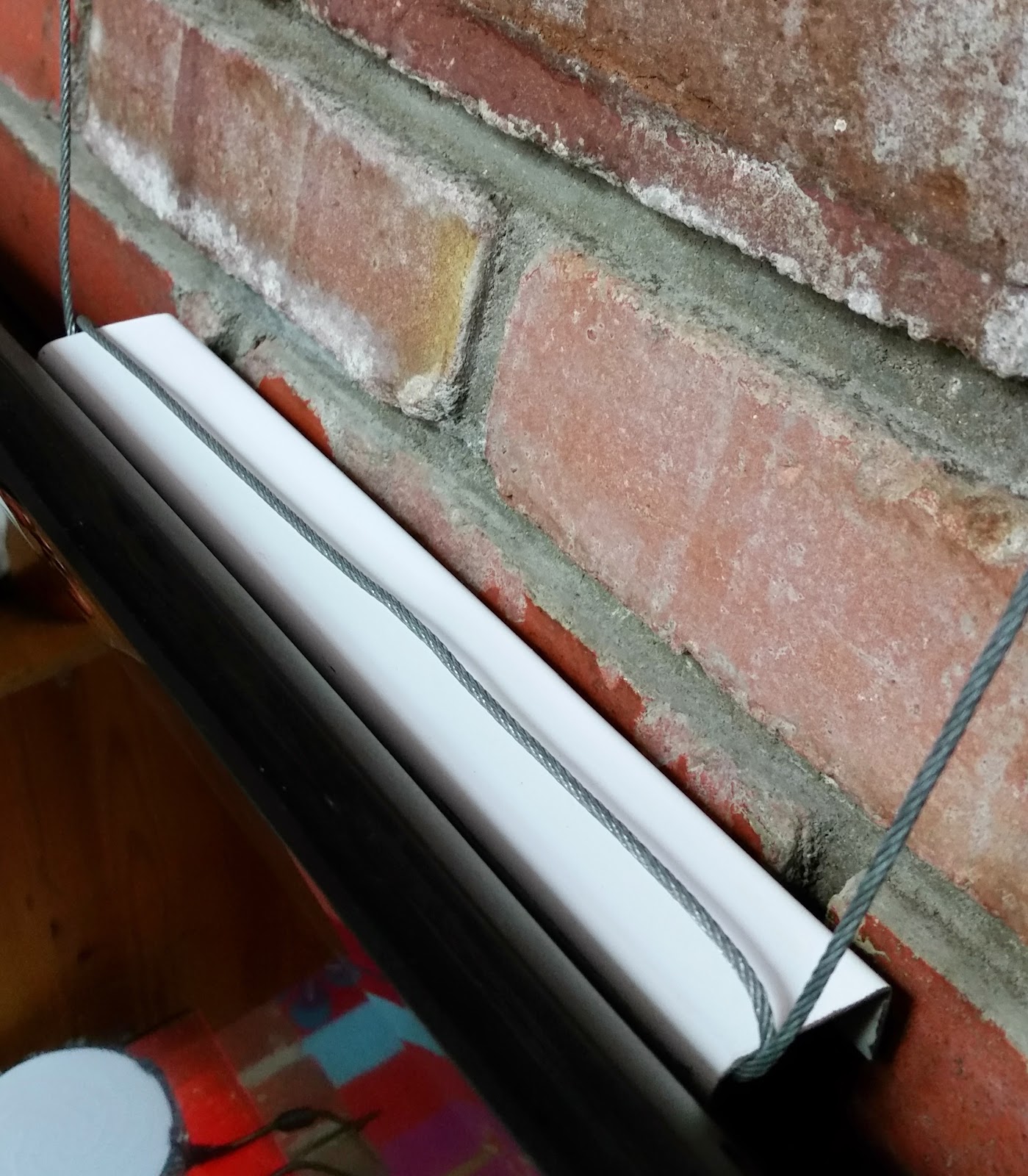 Here is how TV looks when lowered almost down to the floor. The cable can easily move side to side and provides for a very solid connection. 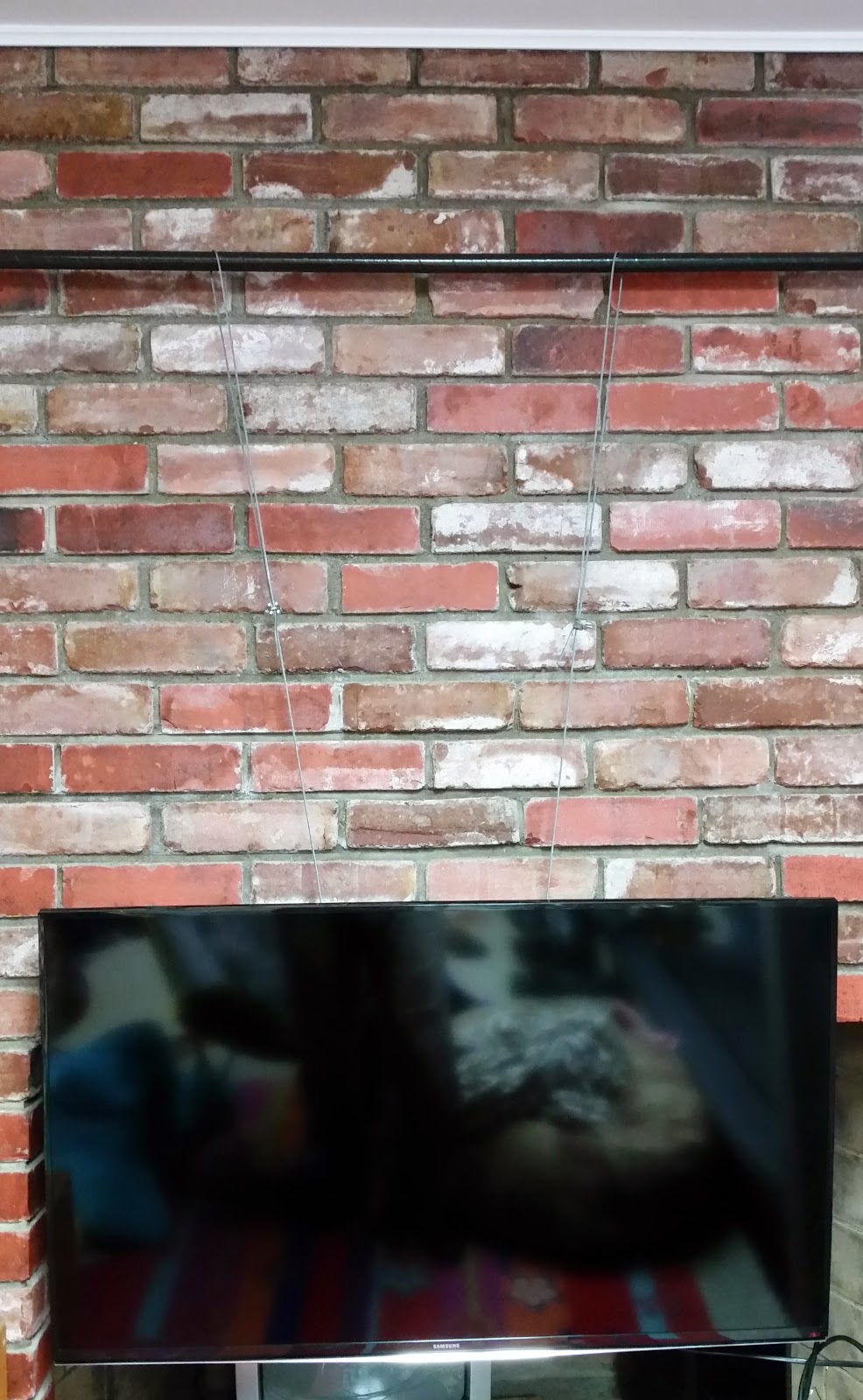 The project took only about 2 hours to complete and cost me $0 as I already had all the parts in my garage. I would be interested to see other ideas on how to do this same thing - mount your TV on the wall so you can move it to any location you desire in less than 60 seconds.