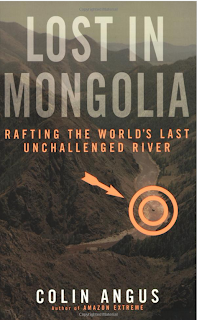 Last year I've read the book “Beyond the Horizon” by Colin Angus, the Canadian adventurer who completed the journey around Earth in less than two years using his muscle power alone. No motors, no sails – only the power of his arms and legs. He traveled total distance of 43,000 km from Vancouver by bike to Alaska, rowed thru the Bering Sea, biked and trekked all across Siberia via Moscow to Portugal, rowed across Atlantic to Costa Rica and biked back to Vancouver.

Colin has made a handful of other epic trips and written books about those. The one I just finished is called "Lost in Mongolia". Colin and his crew were the first in the history of mankind to navigate all 5,500 km of Yenisey river from its start in mountains of Mongolia, thru Russian Siberia to Arctic Ocean. They also filmed a movie of their adventures (I bought a DVD and watched it with kids this past weekend).

I like Colin's writing style, not to mention how much I love his adventures. Very powerful stuff and not only because of adventures, but also because of the cultural experiences as this human interaction is one of the biggest aspects of the trip for Colin and his crew. Since I am originally from Russia, it was particularly interesting to read about his experience in Siberia and the kind of people and support he had while being in this tough land. Fortunately and unfortunately his experience does sound very much like real Russia these days.

Colin's team has spent over 5 months on the river and had a whole lot of fun. This makes me want to take a rafting or kayaking trip in the summer of 2014. Perhaps for 5 days? No, not on Yenisey river :-), perhaps Boundary Waters?

Email ThisBlogThis!Share to TwitterShare to FacebookShare to Pinterest
Labels: Stuff to read, Travel