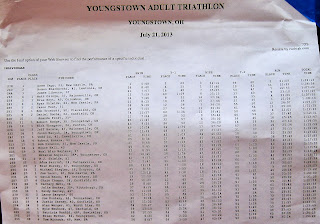 (click to see larger image)
Yesterday I had the fastest bike split overall and compared to my last year race I have improved swim, bike, T1 and T2. However my run time was longer, but I believe this might be due to the fact that they changed to run course and some people believe they have made it 3.5 miles (almost half a mile longer than last year). I am pretty happy with the result, but looks like I have to really work on my swim if I want to win this next year. The guy who won 1st place this year is 23 years old and was a collegiate swimmer and now aquatics director at the YMCA :-).

Interesting week before the race

The entire week before this race I spent on a business trip in Northern Italy. I flew to Milan on Saturday and ran seminars for IBM as well as met number of customers in Verona, Venice, Parma, Milan, Florence. This past week I drove in a car total of about 1400 km and traveled on the train about 620 km.That makes it about 2,000 km in one week on the ground plus about 12,000 miles in the air. What is worse is that my hotel did not even have a fitness center :-(. On a positive side - there was a nice lake near the hotel and I was able to run three times last week. Three times in the morning I did 30 min cross training session inside of the hotel room (I pack rubber bands with me), but later during the week I found a fitness center and visited it once - so I was able to swim once for one hour and did 40 minutes on the bike. These were the only workouts last week. I guess you could call it "taper" if you wish :-).

Despite having been to one of the most historically dense areas of the world, I have not had any time to see Milan, nor any other cities listed above, except for 2 hours in Florence that I had before the train back to my hotel. Thanks to my IBM colleague who took me around the city for a beautiful walking sightseeing tour. You can see photos from Florence in this photo album:

Unfortunately I did not have a chance to see Parma, Verona, Milan nor Venice since my customer offices were just barely outside of the city and I had no time to go see any of the touristic places. It was awkward to be within 10 km of Venice and not being able to go into town... Oh well, next time. However I did taste some fine Italian cuisine, including some *real* nice pizza in Milan, risotto with Parmesan in Parma, seafood pasta in Venice, and last not least, famous Florence's t-bone steak (see pics in the album above). All of these were super nice dishes, except for risotto. I now know what NOT to order :-).

In Florence I had a meeting with the oldest bank in the world. This bank is over 300 years old and they have mini-museum with financial records where this bank lent money to kings and alike 300+ years ago.

This past Saturday I flew back to Pittsburgh (about 14 hours travel time), arrived in the house at 7pm, ate and went to bed at 8pm and slept until 3am. Got up at 3 am, went to garage to pack the car with race gear, ate, woke up my older son Misha and at 5am we left for the race.

At 6:15am we arrived at the YMCA, both Misha and I setup our bikes. Misha was racing in his 14 years age group and won 1st place!!!

My wave started at 7:18am. The swim was 500 yards in the pool. I swam steady, but did not go all out as my all out translates into huge energy spending, but negligible speed increase. When I left the pool there were still few folks in it. Each lane had two swimmers and I left my lane before the other guy. If I am not the last out of the pool - I am happy :-). Being first out of my lane is even better :-).


The bike was 12 miles long with 80% of that in the nice city park on hills. I love hills on the bike!! About 5 minutes after I left T1 I saw a particular cyclist in front of me. That was the same guy who I passed last year in this same race (his name is Bryan Ridder). Last year we battled back and forth during the bike and I made few minutes on him on my bike split. This year it was even more interesting. We passed each other probably 10 times. I would pass him on the hill and he would catch up and pass me on the flat. This was very motivating and fun! Probably pushed me to get the fastest bike split of the day :-) However I must say that having only biked once in the preceding week made me not feel my biking legs as I usually do.


Officially run was 3 miles long, but some folks with GPSs reported between 3 to 3.5 miles. The run course was different from last year. First 1.5 miles of the run are going up the moderate hill and feel quite hard. Then you make 2 laps on the track under the roof and from there it all goes down the hill. This year I felt a lot better on the run than I did a year ago, but now I wonder if that is because I did not push hard enough?

One problem was that some sections of the run were a little confusing and despite having many volunteers on the run course (thanks YMCA!!!), there were still few areas where I was not quite sure where to go and after having ran for a bit I would see the arrows on the pavement to reassure I was on the right path. Ouch... Later I heard some runners complained that they lost a minute or two because of this.

In any case, I do need to do more speed work and such. Run is the hardest part of the event for me and it is perhaps the most important for me at the moment. More important then the swim as there is a lot more time on the run compared to the swim. Plus I know how to improve my run, but I doubt I can make much progress in improving my swim by any significant margin...

Overall this was a great race and I enjoyed it. One of the most important things for me this time was that I was so busy with travel, logistics, etc. that I did not have much time left for pre-race anxiety.

The best part of the even was to have my son with me and even better - to watch him win his 1st place.

Photos from the race: 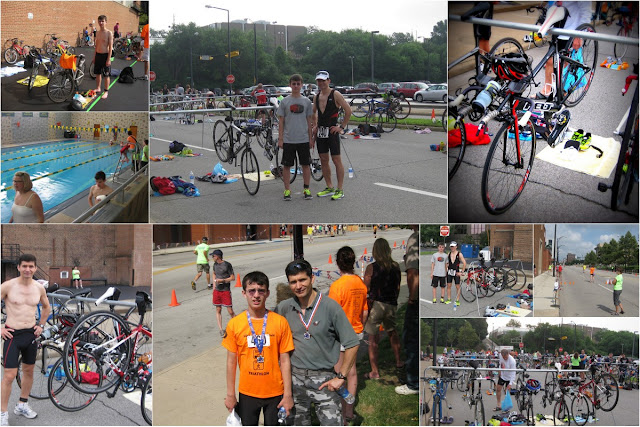