This morning I raced in Davis sprint distance triathlon in Boardman Ohio. Complete race results with splits are posted on this site. This was my second triathlon race ever and I loved it! The race was very well organized. While riding and running we did share the road with cars, however I did not have to stop at any intersection as police and volunteers were blocking the traffic when needed. The weather was just perfect - about 65 degrees, almost no wind, overcast, nice water temperature. Most of all - new place to ride and run is always fun.

The distance was very short - 500 yards swim, 14.5 miles bike and 5K run. I finished in 1h 11 min 51 sec and took second place in my age group (35-39 years - there were 10 participants). There is still a lot of space for improvement - especially on the swim part, but also on the bike and run as I did not push to the limit today. Plus, I did not do any short distance specific training in preparation for this race (other people probably did not do it either).

My swim was quite slow - 1 m 55 sec per 100 yards. I should have pushed harder as I can maintain this pace for about an hour and here I swam for only 9 min 30 sec total. In my age group I was 4th in the swim, but out of 98 total participants in all age groups, I was #41 with my swim time (10m 26s including the running part to transition area). The fastest swimmer was 6m 47s - again, including the running part. I was 54% slower (assuming that the run from the pool to transition was the same, the difference is even bigger). Need to work on my swim pacing and speed.

The bike leg felt very good and enjoyable - I averaged 21.9 miles per hour (35.2 km/h - this is 4.6 km/h slower than the average speed of the last year Tour De France winner who had to ride a LOT longer and had a LOT more climbing :-). In my age group I was second on the bike, but out of 98 participants, I posted 8th bike time (overall) and was about 14% slower than the first biker.

My run felt hard at the beginning, but second half got much better and my average pace was 6 min 41 sec per mile. The run course was almost flat with minor rolling hills. I probably wont be able to maintain this pace for 10K, but we will see on June 3rd :-). In my age group I was second on the run, but out of all participants (all age groups) I was #13 on the run - that is 28% slower than the fastest runner.

As far as transitions - this is my best discipline :-). I was 4th fastest on the T1 with 22 seconds and 18th on T2 with 32 seconds - the reason being is that my foot was stuck in a shoe as I ran with no socks. Will probably use socks next time as I got two blisters.

My oldest son Misha went with me to the race today and provided spiritual support. We woke up at 5 am, drove for about 1 hour and were among the first ones to setup the transition area at 6:15 am. Here is what transition looked like at that early hour. It got totally packed one hour later. Because I showed up early, I was able to get a good spot. Usually at larger races they pre-assign spots by the race number. 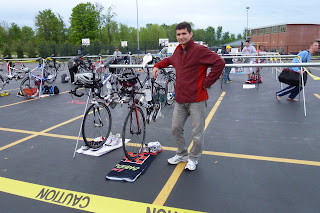 After transition was ready, we went to register, got the body markings (race number on both arms, swim lane on right leg and age on the left leg), listened to the race director who explained the rules and logistics and watched first few heats start. I started at 8:12am - that is 3 hours after I woke up. For breakfast I ate PB&J sandwich with 1 cup of orange juice, while driving drank another cup of orange juice and ate a banana. While waiting for my heat start I ate two more bananas and sipped total of about 12oz of water. Total from 5 am till wave start at 8am fluid intake was about 4 cups. Felt perfect on the course - no GI issues of any kind. I had very similar pre-race protocol for my marathon race last fall and did not have to go to the bathroom for the entire length of the race (3h 23m). So this seems to work well for me. During this sprint race I did not eat or drink anything at all. I took one sip from the bottle while on the bike - just in case, but it was unnecessary. I think I will leave bottle in transition next time to shave off weight from the bike for the sprint distance.

Since I was in the 4th heat, it was fun to pass people on the bike and on the run. But the hardest part of the entire race to me is always a first 10 minutes of the run off the bike. I did do some bricks in training, but not at the race intensity. Misha was waiting for me at the finish line. 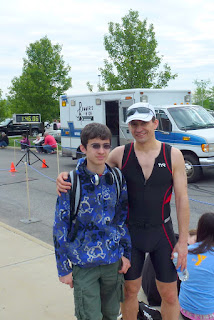 Once the race was complete, Misha and I went to award ceremony and I was surprised with my second place finish :-). Since this was my second triathlon I have never taken "podium" before (too bad they did no have a real podium :-). There were only 10 people in my age group (small race), but still it was nice to receive a medal. My Pittsburgh Triathlon Club also won a "bragging rights" award against the SteelValleyTriClub. There were about 13 folks from the PTC - we took a team picture and that was a nice touch to the day. 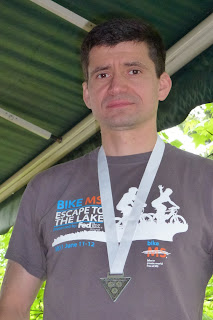